Showing posts from February, 2011
Show All

Somewhere in the middle of the film 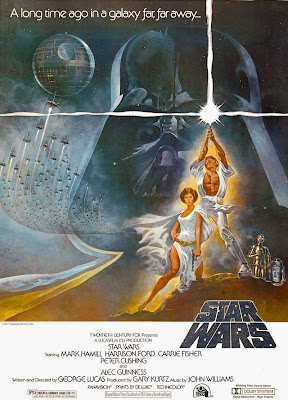 Stories are always bigger and more complex when you don't know them. A clip from a new film shown on TV somehow manages to make the film appear much more epic and far reaching than it in the end it actually turns out to be. Take Star Wars . This was big news back in 1977 and endless showings of the same clips on TV somehow made me think of it as a grand epic tale with the scope and intense world building of Frank Herbert's Dune (although I hadn't read that either). Those clips. This was surely going to be the best film ever? I couldnt wait. That bit they kept showing where the two droids crash landed a spaceship in the middle of the desert. Wow. Obviously somewhere in the middle of the film; the droids on a mission of some importance that must have been interrupted somehow. But when I eventually saw the film the clips I was already familiar with from TV (not to mention the pictures on the bubble gum cards) were somehow diminished. Too near the beginning, too close tog
Post a Comment
Read more

The Death of Thugg

Awoke early this morning and spent a miserable couple of hours tossing and turning whilst hoping that the severe headache that had me in its grip would just GO AWAY . In the end it didn't which was most unsatisfactory. I had to get up and go in search of painkillers. Luckily I didn't have to go very far - they were in the kitchen. This is a marked improvement on the occasion when, whilst still living in Astra House , I had to actually get up at 3.30am, get dressed and stagger up Preston Street and along Western Road and into actual Hove before I found a twenty four hour store where I could buy some piss weak generic painkillers (not even something with added codeine oomph). I learnt a valuable lesson that night; always keep painkillers in the house. You'd have thought that by now we'd have evolved out of tension headaches  which are no good to man nor beast. I mean, from an evolutionary point of view they're a terrible burden... Thugg the Caveman sleeps in a
Post a Comment
Read more

Down the Tube 6: Via Imagination 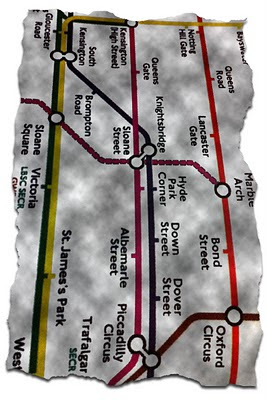 Just as moving house had opened and closed the first book of my Tubehood, The Case of the Victorian Zodiac , so moving house once more at the close of the seventies would bring the second book, The Case of the Dism Rly , to an end and set the pieces up for the third and final book in the trilogy. We weren't moving far, just a mile or so down the road to Cranley Gardens. This was near Highgate tube and Highgate Wood (two of the primary locations of book two). Nevertheless things were very different now. For a start I was growing up. Not only had I recently discovered the allure of spiky women in general and Toyah Willcox in particular which had put an entirely different spin on things, but I'd also moved up into the senior school. This latter move was an extremely unpleasant one (at some point I will write a comprehensive blog entry explaining why), so suffice to say that I decided to continue concentrating on my inner life and as a result my enthusiasm for all things
1 comment
Read more 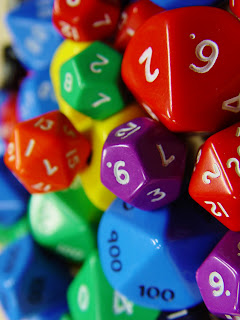 "God does not play dice with the universe" Albert Einstein I find it astonishing in this day and age that the whole business of "should Creationism be taught in schools?" is even discussed. It's not an issue of religious freedom - people should free to believe in whatever they like however stupid it is. It's an issue of whether what should be taught in schools should make fucking sense. By all means teach people about religion in schools ( some people believe this whilst other people believe that and sometimes people kill other people for not agreeing with them ) but anything about the way the universe actually works should be based on facts or at least as close to facts as are currently available. When something is unknown that too should be made clear. But , argue the Creationists, Evolution's just a theory too, goldarnit! No. No it isn't. It's just logic. To be honest I don't even think it should be dignified with the epithet "t
1 comment
Read more

Down the Tube 5: Don't Jubilee've It 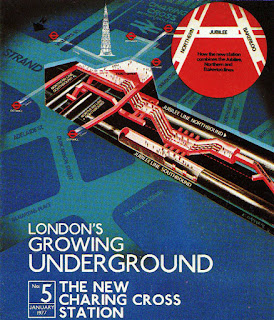 As my story nears puberty I find that the memories are starting to fragment and it's becoming more difficult to construct a coherent narrative of my childhood relationship with the tube. Perhaps because this is because I started to see things in less black and white terms and could no longer access the mental space in which I felt the simple joy of losing myself in a complex but highly ordered structure. In many ways it was liberating to move on from this absolute mental space as it meant I was less likely to get upset when this structure was disturbed. In retrospect such upsets were absurd, but they seemed very genuine at the time. One was when I discovered that the tube map was not to scale. Of course it should have been plain as a pikestaff given the regularity of the diagram, but nevertheless I was very resistant to the idea that the distance from High Barnet to Camden Town wasn't the same as the distance from Camden Town to Charing Cross. It was similar to the sense of b
1 comment
Read more 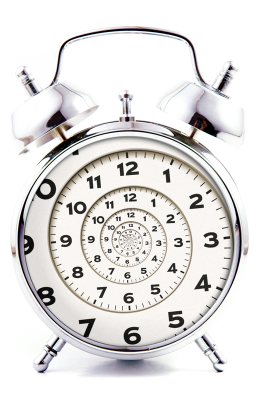 I get the feeling that I have already mentioned the whole issue of waking up just before the alarm clock goes off in this blog. It's exactly the kind of thing that it would have occurred to me to write about in the early days when I was doing it regularly. Back in that heady time I used to get up at 6.30am, tap away at the keyboard and then hit PUBLISH POST without a second thought. Given that I'd so recently dragged myself up out of sleep it isn't at all surprising that I'd end up writing about alarm clocks. Nowadays I plan things more and write a blog entry over a couple of days so alarm clocks aren't so fresh in my mind. It's odd when it happens though, this preemptive waking. Depending upon how deeply you've been asleep you snap or drift into wakefulness and wonder what it is that has roused you. Sometimes it almost seems as if you heard an alarm clock going off in the next room or at least dreamed that you heard one. And then it actually goes off
Post a Comment
Read more

Down the Tube 4: Charley Says 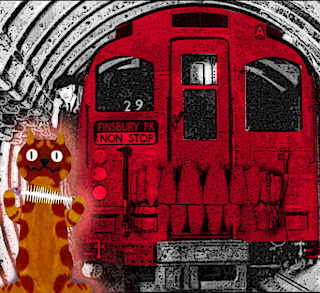 It hadn't occurred to me that wandering around old tube lines might be dangerous. Even though I lived in a world shaped by the terrifying images drummed into my head by public information films I didn't think it applied - I wasn't messing around with a kite near pylons or fooling about by some deep water. True, there had been an supposedly hard-hitting one about children getting killed playing on railways. The mere concept of this one had so terrified me when it was discussed on Nationwide that when they actually showed it I ran and hid. But this was the Tube. It was different. Besides, the ghost railways I had discovered didn't have any sleepers or tracks. I wasn't going to get run down now, was I? I finally discovered the secret behind these old lines purely by chance when going to visit a Great Aunt and Uncle in Fingringhoe. I found their bookshelves fascinating, just like the bookshelves of my grandparents. And what was this? A London A-Z from 1947. I turne
Post a Comment
Read more
More posts