Showing posts from May, 2006
Show All

The strange world of anthropomorphic vehicles

The world of advertising is an odd one. However it seems that when you can advertise yourself though your own media then even the normal rules don't apply and it all starts getting surreal. I started thinking about this the other day when I saw this self-promotion on the back of a bus: Yes, I know it's a quote from Little Britain , but I don't understand the relevance to the Park & Ride scheme. Am I being obtuse or does it just make no sense? Did the advertising "creatives" get stoned and watch a L ittle Britain DVD? I suppose we're just lucky that we didn't end up with: "Park and Ride... The only gay in the village" It gets weirder when you get on the bus though - that's when you come across the posters inside. Originally they used stock photography of middle aged men and women photoshopped into a bus driver's uniform. The same bus driver's uniform. Which was boring and not particularly well done, but not really that odd. Howev
Read more 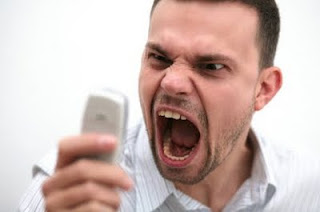 It's not that long ago that the possession of a mobile phone was still relatively unusual, but it's surprising just how indispensable they have become over the past seven years. Accidentally leaving the thing at home is almost like having your left arm cut off. And yet, despite their twenty-first century ubiquitousness, there's still a surprising amount of negative feeling towards them and their users. Of course you can understand where this antagonism originated . In the 1990s many a smarmy sharp-suited businessmen used his leatherette-encased-brick-a-like mobile as a status symbol, showing off in public by bawling into the mouthpiece that he was on the train but would be home in five minutes. Who wouldn't get annoyed with that sort of behaviour? However, the tenacity of this mobilephobia - hanging around into an age when we've all got one and have all had to use it in public - is totally bizarre. It's not as if you even need to shout into the things any
Read more

May 17, 2006
I try to cycle in to work; mostly because it's likely to be the only exercise I get all day what with the largely sedentary day-job which has me sitting in front of computers from nine to five. OK, so there is a gym here but it's at the top of a hill for god's sake! Unfortunately, when you cycle you somehow end up becoming a third class citizen of the streets, sworn at and abused by car drivers and pedestrians alike, despite the myriad roadcrimes they themselves commit. This is even if you stick to the cyclepaths. Car-drivers seem to assume that cyclepaths are intended for use as additional parking space, meaning that you have to swerve past them into the motorised traffic - and get sworn at by the other drivers for your trouble. This gets even worse when they park in the cycle lane and then open their door into your path when you're already swerving to avoid them (and getting sworn at by the other drivers for your trouble). Then there are the drivers emerging from the
Read more

May 10, 2006
The problem these days is that there are so many separate online services to sign up for that your online personality ends up shattered with bits of yourself scattered all over the internet... You know the kind of thing you mean. You have a MySpace account, but then one of your mates has one on Friendster so you join that too. Then you get an invite from a friend to join them on Hi 5 and another to start mapping your friends on Frappr . In the meantime you're uploading all your photos to Flickr and collecting all your favourite links on del.icio.us . You have a blog at Blogger , but then again all these other services offer them too... Some of these services are new and innovative whilst others are attempting to emulate the ones that are. But how can you tell which is which? You have to sign up for them all and end up with your identity schizophrenically splintered across cyberspace. I'm going to try to do something to gather my online self all back together by creating a p
Read more

May 05, 2006
The first in an occasional series when I can remember and be bothered to record them. Somehow I had got Siouxsie and the Banshees to do a gig for my birthday on the top floor of Dream RIBA. They'd also stayed at my flat the night before and in honour of that they ad libbed a song about my cat (the lyrics of which just consisted of Siouxsie making cat noises). Some of this appeared to be happening in Dream Central London. At some point soon I'll expound on my observations of Dream locations and landscapes .and how they're consistent from dream to dream - but remarkably different from their Waking World equivalents. Also about how there seems to be dream continuity - someone in one dream can refer to an event in a previous dream and it makes perfect sense as it happened in the same "world". Lots of other stuff about packing up the band's equipment and a related segment which also took place in Dream RIBA - me and several colleagues from my current place of wo
Post a Comment
Read more

This is something that has been annoying me for a while; however my recent return from LA where I used the buses quite a bit has brought it to the fore again. In my local area there's a flat fare for a bus ride. It's rather high - 1 pound 50 pence 1 - but fair enough. In addition, they also use driver-operated buses. This means that it is impossible to get on the bus without either paying your fare or having a valid pass. Again, fair enough! The corollary of this situation - namely the combination of the driver operated buses and the flat fare - is that it is completely impossible to fare dodge by riding too far on your fare. Why, then, do they employ ticket inspectors? And they do - I've been on more buses troubled by a ticket inspection in the few years I've been here than I have in decades living in London. Don't they trust their drivers to do the job properly? If I was a driver for this company I'd be insulted by the implication of employing ticke
Read more

Just to finish off a short account of my week in Los Angeles. Sunday. Drove with Samantha, kids and D&G to Snow Mountain for sledding and general cold white activity. Impressively high up and deceptively ultraviolet; it was cloudy and so I didn't wear sunblock. As a result I ended up with bad sunburn. At least it's physical evidence I've been away somewhere climactically different. After a while the snow started vanishing. Still an impressive scene though. Monday I got the bus all the way to Santa Monica. I'd been before, but this time it seemed more crowded. Despite being basically a tropical beach it had something of Brighton about it, despite everything being ten times bigger. I visited the pier, the beach, the pub and Borders bookshop. All of which of course you can indeed do in Brighton. But it was more interesting doing it here. Tuesday was generally a chilling out ish day. Met Samantha for lunch and then went to watch Darcene's ASL lessons for th
Read more
More posts