Showing posts from June, 2013
Show All

As has been chronicled several times in the past I was a child obsessed with the space programme. And no wonder; those were exciting times what with the moon landings, Skylab and the Apollo Soyuz Test Project . What with the Space Shuttle on the horizon I was sure that my future lay off world. It was only a matter of time. One of the most exciting things I'd read about in the Brooke Bond Race Into Space picture card set and Reginald Turnill 's The Language of Space was the Manned Flight To Mars . This was likely to happen in the mid eighties. I imagined that by the time I was in my forties that it wasn't beyond the bounds of possibility that I'd have been to Mars once, the Moon two or three times and the various space stations more often than I could remember. Spaceflight would be commonplace in the 2010s. Civilization's failure of nerve and imagination since the 1970s has never failed to disappoint me. We are living in an age when even the prospect of re
Post a Comment
Read more 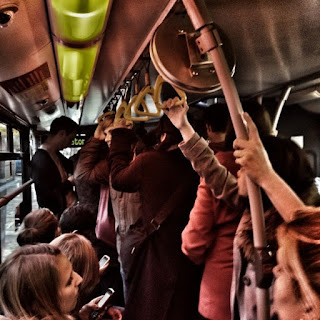 I've noticed that a lot of people don't like sitting backwards on public transport. Occasionally I've heard people discussing this - claiming, amongst other things, that it makes them feel sick. Personally I've never experienced this reverse nausea and actually prefer sitting backwards. Why? I have no idea. Sitting facing forward certainly doesn't make me feel ill or anything, it's just that there's something appealing about not facing the direction of travel. Whether this says anything about me psychologically I have no idea (too much time dwelling on the past rather than looking to the future?) but one benefit is that it means I'm more likely to get a  seat. Until recently I was only able to indulge my preference on trains, the sole mode of transport that offered backwards facing seats. However a few years ago they began to introduce the bendy-bus to Brighton. These were London Transport's cast-offs and apparently hadn't been popular. I hav
Post a Comment
Read more
More posts