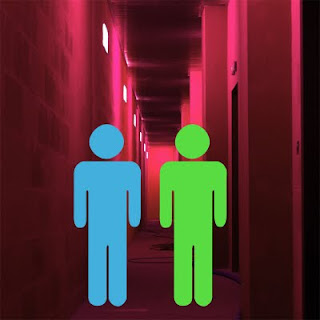 I realise that I'm just being annoyed at nothing again, but this particular nothing has been bothering me for years, ever since I first started working in an office environment way back in 1989.

I usually spot instances of it whilst on my way somewhere - toilet, canteen, refectory, library - it doesn't really matter. The important thing is that I'm in transit. And I will spot them - two people who until relatively recently were obviously also in transit - sometimes one of them might be halfway through a door, another might be carrying a cup of coffee. But their transit has been interrupted by the fact that they've found something to talk about.

Now of course there's nothing wrong with this so far. Seeing someone whilst on your way somewhere might remind you of something you had to say to them; instead of putting it off and possibly forgetting, it makes sense to pause in your travels and get it off your chest.

The annoying thing starts when I'm on my way back from somewhere - toilet, canteen, refectory, library, wherever. It can sometimes be quite a few minutes later and they're still at it, halfway through a door, coffee slowly cooling in its mug. I can just about forgive this, however. It becomes intolerable when I pass them again on my way somewhere else - toilet, canteen, refectory, library, wherever - still in the same positions, still droning on. And then again on my way back. And sometimes this goes on for what seems like hours, my rage slowly building.

For god's sake Get A Room! If it's that important a conversation surely you can go and sit down somewhere and have it?

Ten times worse though is when I find myself trapped in one of these corridor converations. And it's then that I realise that half the people perpetrating this annoyance are actually blameless, being held against their will...