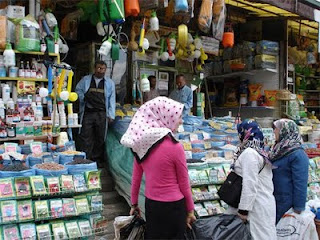 A lot of people complain about customer service. The general consensus is that it's gone to the dogs. As I've pointed out before, more often than not these days consumers are treated as suspects rather than customers.

A terrible state of affairs of course, but what's even more terrible is when customer service goes the other way and becomes over attentive and solicitous. It's not just me - I've spoken to friends about this and they all feel the same.

It's at its worst when you get into a routine - for example if you call at a particular shop/cafe/stall for your lunchtime roll. After a surprisingly short amount of time the owner recognises you and then starts anticipating you. That's what I hate, being anticipated, with all the underlying implications that I'm being dull and predictable. Unfortunately when they say "Ah, cheese salad roll again today sir?" I haven't yet plucked up the courage to say "No, I thought today I'd go for a dead kitten in pitta".

So you stay away, you go somewhere else, you walk an extra half mile to avoid this particular shop/cafe/stall, you make your own lunch or go hungry. But these people have long memories, and the day will come that you're both very hungry and in a hurry, so you relent and decide to patronise the offending establishment again.

"After all," you think, "They must see hundreds of people a day. Surely they'll have forgotten me by now?"

No such luck. As soon as you walk through the door the joyous shout goes up.

So not only are they anticipating you, they're now inappropriately trying to engage you in conversation. There's nothing for it, you're going to have to get a different job on the other side of town.

Of course I haven't experienced the worst of it - a friend reported how the proprietors of a fast food joint became over-friendly to the point that they allowed her to jump the queue, gave her free stuff and invited her to sit down for a cup of tea. Needless to say she stopped going there fairly shortly afterwards.

They've got technology on their side, too. You'd think that one safe way of avoiding all this would be to order stuff over the phone. Hooray, no need for any of that mucky fraternisation stuff, it all gets done down the wire.

Unfortunately the phone remembers who you are and tells them. Last year I ordered a pizza over the phone. Before I had a chance to speak, the man on the other end had told me who I was and where I lived. But the crowning annoyance was when I placed my order.

"Ah," he said in response to my request for a deep pan vegetarian with no olives, "Same as last time then."

Me, I think I rather just be treated with suspicion.