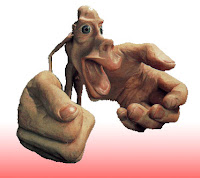 I'm writing this with a perceptual hole in my left cheek. A couple of hours ago I had a biopsy which involved a local anaesthetic to allow the maxillofacial surgeon to take a tissue sample from the inside of my mouth. As a result I'm drinking a glass of water and half expecting it to dribble out the left hand side of my mouth which I could swear was wide open to the elements. It's just like the feeling you get after a dental anaesthetic only more so.

I don't exactly know how much flesh they took or what they're sending it away to be tested for, but apparently it will take a few weeks. Still that's not too bad. They had to send my DNA away to Wales once and that took a month and a half.

I'm continually disappointed with what medicine can and can't do. This isn't an attack on the health service of any one country as I'm sure things are the same anywhere. It's simply that 21st century medicine just isn't good enough. Perhaps I feel this because I've been born before my time; however it's more likely to be just because I've watched too much Star Trek over the years. It seems absurd to me that they have to physically cut bits out of me and (probably) dissolve them in test tubes when all McCoy, Crusher or Bashir would have to do would be wave a tricorder at me and then stick me on the dermal regenerator for thirty seconds.

Maybe I'm being ungrateful; after all I'm not living in the eighteenth century when I would have stood a good chance of having my leg hacked off by a fop with a rusty saw or being dead by now anyway. It's just that physical intervention in the meat machine still seems so primitive. Can't I just snort a a swarm of pre-programed nanobots?

It's not exactly unusual for someone to be freaked out by surgery, even if all I'm talking about today is the removal a few scraps of tissue and a couple of dissolving stitches. The problem for me is that it always makes me start questioning my identity; who and even what I actually AM. If all I am is my physical body, then haven't I just lost part of myself? I do hope it was nothing important.

Once the body horror takes hold then I start noticing my machinehood more and more. I lie there at night listening to my organic pump and ventilator and worry about what would happen if one of them just stopped. I start analysing my own thought processes, wondering if I'll catch my brain out making a processing error or whether I can force a soft reboot.

I wonder if there's a different OS I could run? I'd even settle for a service patch.
body journal