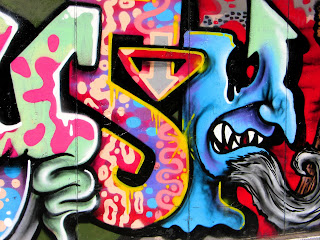 He's the kind of "nice bloke" everyone seems to know and love, which alone is reason enough for loathing. Then there's his appearance.

For a start he's usually far too tall. You know the kind of tall. Not lanky and ungainly but just tall, the kind of tall that women seem to like. You're almost too scared to ask in case it's something ridiculous like six foot ten.

He doesn't have much hair, but that's no comfort because he's usually shaved his head and so as a consequence just looks cool rather than bald. Most of the time he wears square rimless glasses which make him appear far more intelligent than you suspect he is. He's got a wide grin that matches the glasses and makes his head look like the front of an expensive car.

He's always casually dressed. There's a baggy t-shirt with some hip-hop graffiti design on it that you'd love to say was too young for him but which actually rather suits him. He's often seen in baggy khaki shorts that end at the knee showing off calves like tree-trunks. If you're really unlucky he's wearing hiking sandals revealing toenails the size of mobile phone screens.

None of this would matter if he was an asshole, but he isn't. You may well have come across him socializing with a bunch of his male friends talking loudly about football and guffawing, but unfortunately that isn't all there is to him. He fits in. He's capable of being quiet, sensitive, intellectual and of holding his own in a serious discussion about philosophy or politics. And of course of frowning disapprovingly should you make a slightly off-colour joke.

He's got a girlfriend, of course. She's usually delicate and unnervingly attractive. She's got a wonderful sense of humour too; in fact the only negative thing you can say about her is that you don't think much of her taste in men, because she seems to adore the guy. If only he'd cheat on her or something, but of course he won't. They have a child.

The child is a daughter. It's always a daughter. She's probably called Holly or Poppy or Daisy or something and is about five years old. The guy dotes on her. So much so in fact that you think it's almost suspicious. You don't know whether he harbours incestuous paedophilic feelings for her but by god you hope so.

But in the end it's the job that does it. Sometimes he's got an exciting job like graphic designer, and when you see his work it's always brilliant and far better than you could ever manage. The man has talent. But most often you'll ask and he'll tell you he's a social worker. Or a nurse. Something worthy.

And this of course is the worst thing. Not only does everyone know and love him, but they're right to because he's a genuinely good person. And in comparison you cannot but help come to the conclusion that it is in fact you who are Deplorable Man.
fiction writing