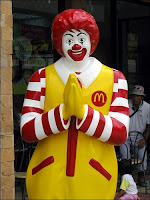 This is something I haven't seen that many people complaining about yet, although I'm sure there are any number of curmudgeons1 banging on about this in dark corners of the internet. Never mind, I'll join their ranks anyway.

There's a lot wrong with McDonald's, most of which you can find elsewhere on the internet, so I'm not going to waste your time or mine discussing it here. I'm not on about exploitation of workers or damage to the environment. You won't hear a thing in this post about about the promotion of unhealthy food or "supersize me" culture.

The only definition of this term I could find online was in the Urban Dictionary and that wasn't what I meant at all. I'm talking about something far more insidious. By the use of one sustained ad campaign over a number of years McDonald's Corporation have managed to infect the brains of a large proportion of the English speaking world. They've even got to intelligent articulate people whom you wouldn't even imagine going into a McDonald's to take a dump. You just need to search through Twitter to see how widespread it has become. Can you tell what it is yet?

The verb "to love" is what is known as a state verb, that is one that describes a state and not an action. When you love something you are continuously doing so, it's not a one off action. The correct phrase in the advert should be:

Quite why the advertising executives passed over this simpler and far more direct slogan is a bit of a mystery. Perhaps they were uncomfortable with the emotive word "love" in its purest form. What I find odd is how they got away with it. Try it with any other state verb and it sounds totally ridiculous, for example: "I'm knowing it".

I think it's Minnie Riperton's fault. She started her 1975 hit "Loving You" with the phrase "Loving you is easy cause you're beautiful..." I think this gave some legitimacy to the word "loving" and by extension "lovin'" despite the fact that halfway through one of the verses she quite clearly runs out of inspiration for the lyrics and lamely concludes:

However, her use of the word "Loving" is correct - she's using it as part of the noun phrase "Loving you" which is the subject of the sentence. She then informs us that this thing "is easy" and goes on to explain why.

So the McDonalds ad is incorrect English unless the actually mean "I am not actually a person but am the abstract state of loving it". Which I severely doubt. So the message for today is simple.