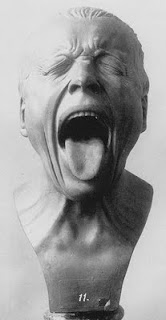 The perceptual hole in my cheek has gone away, replaced by a sore patch on the inside of my mouth with a knot of string at the centre. The string - stitches apparently - is supposed to dissolve in time. I suppose it's no worse than when you bite the inside of your cheek, and at least it's an excuse to eat ice cream.

As an alarm system, pain is second to none. I have nothing but the utmost respect for it. I still remember a cautionary tale I read as a child concerning a blacksmith who, upon flattening his thumb with a hammer or something, wished out loud that he could feel no pain. This wish was duly granted by a passing sprite and the next day when the blacksmith was going about his business he looked down and "...there was his arm, burning merrily away..."

So, pain is a good idea on the whole. But I can't help feeling that sometimes it's got it wrong. Pain after injury is fine; I can see the point of this - it prevents the sufferer moving around too vigorously and exacerbating the wound. It might seem a trifle unfair, given that the sufferer has been though so much already, but it's logical.

Headaches on the other hand, make no sense. We've all seen the diagrams in the adverts - "...tension here..." (red circle flashes over back of neck) "...leads to pressure here..." (arrow carries the circle to the top of the head) "...resulting in pain here..." (arrow moves into forehead which then explodes accompained by a graphic of a woman frowning).

Fair enough - that's how it works. But why? There's very little Thugg the Caveman could have done about it back in 100,000 BC - and tension in the back of the neck isn't exactly life threatening. If anything, coming down with a migraine whilst in the middle of a sabre-toothed tiger hunt could be downright dangerous.

Faced with the kind of headaches I get sometimes, chewing on a bit of willow bark just isn't going to cut the mustard. And I draw the line at trepanning - I need that like I need a hole in the head...
body journal Thugg the Caveman