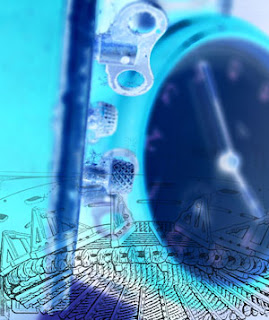 Waking in the night can be confusing if it's still dark. You have no idea what time it is. When you finally look at your watch it can be a big surprise. Sometimes it's a pleasant one; if you've been deeply asleep it usually feels as if you've been offline for many hours, so discovering it's still only 2am and that you've still got the whole night ahead of you is welcome relief.

On other occasions, such as this morning for me, the reverse is true. It will be 5.30am or something and you realise that the alarm clock is just around the corner. In these latter cases it's rare that you actually get to sleep again because you're so worried about getting to sleep again. You want to make the most of what little downtime you have left. Eventually you manage it at around t-minus three minutes.

However, a year or two ago I had an experience that was neither of the above. I mentioned before how when I was younger I used to wake from nightmares to discover things had Gone Wrong; this was one of the times that things had Gone Different.

I woke up and felt as if I was outside time. OK, I was still in bed that night, and probably somewhere in the middle of the night, but I was simultaneously aware of the previous evening hovering there somewhere up behind me; I could almost see the lightness of the sky in my brain. And there, downhill ahead of me, was the following day. I couldn't quite think how to make use of this temporal dislocation, but it was interesting nonetheless.

Of course it was probably my brain backfiring; perhaps it had woken up in the wrong order and the mental software process that dealt with time had thrown an exception and unexpectedly terminated. It was a fascinating experience though.

My sense of time is not the only thing that I've woken up to discover missing. Once I woke up and had forgotten who I was.

It wasn't remotely frightening. I felt in a default state, and the thought going through my head was "this could be anyone". It felt good. It was as if I had discovered how to experience pure consciousness without the distorting filter of all the memories and hangups that make it Chris. It also felt as if everyone was the same consciousness... I am he as you are he as you are me and we are all together, as they say. Anyway, I think this description is now getting needlessly mystical. Perhaps it's something I'll explore further at another time.

Whatever the cause - brain kernel crash, the discovery of the secret of the universe or simply too much cheese before bedtime, it was an intriguing and enjoyable episode.