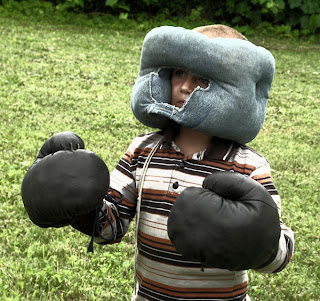 I haven't yet read enough to start wresting with my consciousness again this morning, but rest assured I will. However, whilst reading and rereading what I have so far, it's interesting to note the differences in attitude between people on different sides of the debate.

I quite like getting splinters in my bottom so I'm still sitting on the fence. I find the Dualist stance more interesting and appealing, but as someone with a scientific background I can't help feeling that the Physicalist position is far more likely.

The way they behave whilst arguing their corner also tends to sway me towards Physicalism. If they were political parties, I'd say that the Physicalists were better at oration and spin. Plus they seem so confident. They've got possession of the intellectual high ground and by non-existent-God they know it. If you take issue with anything they say you can't help but feel you're being stupid, immature or gullible. Only from these lips come truth.

Unfortunately for the Dualists they're inextricably linked to believers in Weird Shit like leylines, the resurrection, crystals, transubstantiation, seances and salat. Instantly this makes the intellectual high ground hard for them to even contemplate. As a result they tend to express their views in a very defensive and neurotic manner; you almost get the impression that they're having to try hard to convince themselves, let alone any of their readers.

Both attitudes may be more to do with the culture we're living in rather than being privy to any universal truth (or not). This is the Rational Age; Science in the ascendant. Remnants of the previous age, the Religious Age, are still around, but their achievements are nothing compared to the marvels wrought by the technocrats of the modern era. Man on the Moon, the Internet, the Large Hadron Collider... a veritable Sistine Chapel Ceiling of achievement.

But is this actually The Way Things Are or simply The Way We Are Looking At Things At the Moment? Is the New Atheist Technocracy really the highest form of intellectual achievement? From many of the modern Secular Texts you get the impression that most things are now known; all that remains is for us to do in science is dot the "i"s and cross the "t"s:

"In this field, almost everything is already discovered, and all that remains is to fill a few unimportant holes."

The above description of physics is by physicist Philipp von Jolly in 1878. Oops.

Unfortunately the scientific method means that radical ideas are invariably lumped in with the Weird Shit. Heresy in other words. Perhaps it is time for me to recant any consideration of Dualism and the like... and yet...