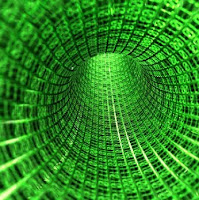 Every word I type I am adding to the sheer volume of information created by the human race and increasing the complexity of the universe.

If you look up the amount of information created and stored over the last few years it's becoming ridiculous. In 2008 a total of 3,892,179,868,480,350,000,000 new bits were created. That's brand new bits, never mind all the rest of recorded history up until 2007. Let's get that into some kind of perspective and convert into bytes. Eight bits to a byte, that gives us 486,522,484,000 gigabytes, which is still generally the largest storage unit people are currently comfortable with - although I have a one terabyte hard disk sitting under my desk.

It's still difficult to get this into perspective though. A gigabyte is approximately 1000 times the capacity of an old fashioned floppy disk, remember them? A floppy disk was approximately two millimetres thick. So, a gigabyte is approximately a two metre high stack of floppies. A terabyte therefore would be a stack two kilometres high - although it might be easier to lay them along the ground. Bypassing the petabyte we move into the realm of the exabyte - a million terabytes. Two million kilometres of floppy disks. To put the exabyte into perspective some claim that all the words ever spoken by human beings would come to five exabytes - in plain text format of course.

And yet the amount of information created last year is almost a hundred times that. Half a zettabyte. I used to know a girl called Zetta, I wonder what happened to her? Anyway, in floppy disk terms half a zettabyte is a stack a billion kilometres high, which would reach from the Sun to somewhere between Jupiter and Saturn. Once more visualisations fail us; the Solar System is very big as this to-scale web page ably demonstrates. Far too big to get a handle on.

I do wonder what counts as information though. Does the DVD of, say, Cheaper By the Dozen count as just eight gigabytes or does every single copy count? It's important to know these things - if every copy counts we could significantly decrease our digital footprint by seeking out and destroying every copy. Then again, doing that would be a good thing as an end in itself...

This information explosion shows no sign of slowing down. Will our old enemy entropy ever fight back?

Far more important than sheer information capacity is the ability to organise that information. For instance, I am sure the amount of information that makes up everything I think of as myself is well within the current capacity of today's technology. What makes the information actually me are the various ways it relates to itself; how it is organised. Once that's cracked I'll be able to escape into data and "live" forever.

Or perhaps I already did and this is merely a simulation of 2009. It would certainly explain the reverse memories and clairvoyance I was thinking about yesterday.

I just need to work out how to hack the code.
data entropy journal numbers