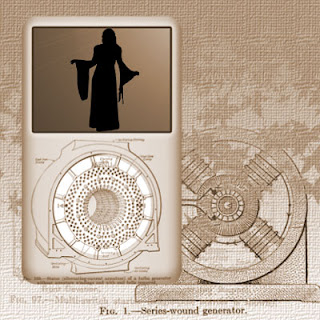 I have yet to do any research into earworms. I will do though, so watch this space. Or listen to this space.

If you look at the comments for yesterday's entry though, you'll see that the That's A Bit Hot song bears some resemblance to a song a friend in London wrote and recorded relatively recently. Coincidence, or something stranger? Generally I am a bit of a born-again sceptic these days (or skeptic as the spell checker would have it) so I would tend to put these things down to coincidence.

Coincidences are commoner than you might think. In the age of the iPod people started to notice this - they kept complaining of their iPod having "moods" when it kept picking songs by a particular artist or songs from a particular album during shuffle. This was not the birth of the arcane process of ipodomancy; iPods genuinely were picking random songs. It was just that the human brain, as has been observed before, is very good at looking for patterns and assigning them significance. It is a plain simple fact that of 23 randomly picked people the chance that two of them share the same birthday is 50%. To our brains this feels insane. But it's just cold mathematics.

In the end Apple had to tweak the code so that that shuffle felt more random to human brains. Despite the fact that this meant that it was actually less random.

I think the same thing can apply to clairvoyant dreams - we dream all sorts of stuff; random collections of mental imagery flung together from our recent experience. Sometimes this will unexpectedly match something that happens a few days later. Most of the time it won't of course, but when it does... hey presto, instant soothsayer.

And yet, and yet... Sometimes the coincidence is too much and makes me wonder. OK, so it's not going to win James Randi's $1,000,000 or give Richard Dawkins pause for though, but then again, it didn't happen to them. It happened to me.

It's not the only clairvoyant dream I've had, but it's one of only a handful that seem to have a little more to them than just random pseudo-meaningful accident. It was I suppose around nine or ten years ago; a couple of years after I'd moved down to Brighton. I had a dream. I had a dream in which I went to a nightclub (by the way, this is a real whilst-asleep dream, not a Martin-Luther-King-type dream). I was sitting there and noticed two women dancing together. After a while I realised that one of them was Princess Diana.

That was pretty much all there was to it. Back in the waking world I actually did go to a nightclub a week or so later. At one point I noticed a couple of women dancing together. I didn't make the connection here - women dancing together weren't exactly unusual in LowLife at The Underground in West Street. However, after a while one of them struck up a conversation with me and we went to sit down and started chatting. I can't remember what about (night club conversations rarely consist of more than just shouting anyway).

Eventually we exchanged names. She was called Diana. And then it struck me that she was the same Diana that I'd known at university whilst a student some fifteen years previously. That was odd enough but then I remembered the dream.

It's hardly proof of anything and could indeed be coincidence, but I am inclined to think otherwise. After all, I have little interest in the royal family and haven't dreamed of Princess Diana before or since. I have no idea what this means though. I am sure I'm not a prophet of any kind.

Bu no-one really knows just how the mind works and in how many dimensions. I could just have been "remembering" in the wrong direction in time by accident.

I wish I could remember next week's lottery numbers.
dreams journal paranormal sceptic