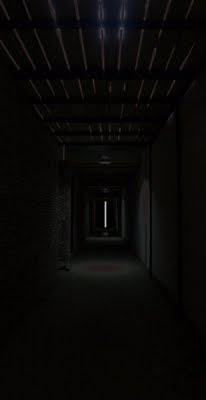 Whilst on the subject of my childhood, the sky wasn't the only place I saw unusual things. For several years I was tormented by recurring nightmares featuring a cast of creatures from my own imagination.

By far the worst were the Dobods - I suppose they were the equivalent of the Daleks in my personal nightmare canon. They had a particularly distinctive modus operandi; I'd always know one was coming because I'd hear a hollow heartbeat in the background of whatever dream I was currently enjoying. The colour would drain out of the landscape and all of the other people present would become indistinct and then vanish. If it had been day, it would now be night. The heartbeat would continue, "Dob - Od - Dob - Od - Dob - Od..." hence the name.

I would no longer be outside. I'd be in a labyrinthine wooden panelled house and I'd wander the corridors - or sometimes be swept through the corridors by a slow wind.

The sawing was another noise which always occurred before the climax of the dream, the sound of a hand saw slowly chewing its way through a plank of wood. After the sawing was over though, I knew I was doomed. The heartbeat would return, louder and more resonant.

I'd find myself deposited at the end of a particular long corridor. I think this one was based in reality as it has a strong association with my parents' flat in Birmingham - I think the bathroom lay at the end of it. In the dream though there was no bathroom. At the end of the corridor the Dobod itself would appear.

It was a vertical line of light, like a door into a lighted room standing ajar. It rocked from side to side in time with the heartbeat, on each beat nearer. When it reached me I'd wake up in terror.

I don't think my parents quite realised how frightening these dreams were otherwise I very much doubt they'd have made up the song with which I started this blog and sung it to me.

Were these dreams a distorted memory of being born? Whatever, after a while they began to feed back into the dream mechanism and the fact that I was terrified of going to bed in case I had a Dobod Dream affected the dreams themselves; I'd have whole dreams that consisted just of the fear that a Dobod would appear.

The dreams stopped quite abruptly. In a dream at around the age of five I discovered that if I bent my head sharply to the right I'd instantly wake up. Problem solved - I'd take this escape route at the first sign of the heartbeat. I even made up a short song to celebrate the fact: