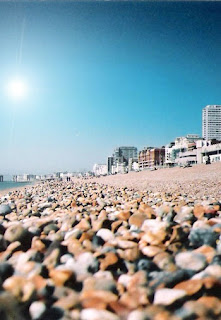 I'm still on my Bank Holiday Weekend - having a bit of an extended remix. Things have been rather busy at work of late and I had a few days to use up before the end of the academic leave year, so I took the Friday and the Tuesday off as well, giving myself a five day weekend. I'm rather astonished and more than a little annoyed to find myself on the last day of it already.

Of course one of the major problems I find with working at a University is that people find it very difficult to disabuse themselves of the impression that I have the summer off. Even after I've explained that only undergraduates and senior academics disappear for three months and that in fact their absence means that the summer is one of our busiest times for me working as I do in IT seeing as it gives us time to update and upgrade... I still get people asking me when I'm going back to college, where I went away for the summer and whether I'm having a good break.

So, given that it's been so busy, it's been nice to have a few days off. I even swam in the sea for the second time this summer yesterday; something which would have been unheard of for me only a couple of years ago - and is quite unusual for a British August Bank Holiday Monday. And now that I've made a reference to the weather I'm afraid I must be put to death instantly. But given that it was Reading Festival Weekend it was unusually clement - I still remember shivering with cold, huddled around piles of paper beer cups, flyers and bits of wood from which people had made impromptu bonfires in an attempt to stay warm long enough to see Nirvana headlining in 1992. The temptation to just give up and hotfoot it to the railway station was almost overwhelming.

However, I think I'm starting to worry about being on leave for so long - last night I had a number of anxiety dreams about work. Mainly about arriving back and accidentally breaking something. Not a computer or a server for some reason - in the dream I kept breaking people's bicycles. I was only trying to help - one person's bike was really dirty so I gave it a thorough clean. The problem was this made the tyres shrivel up. Even worse, they were non-standard tyres that it was almost impossible to replace.

Another part of the dream was completely unrelated and was about Superman, Spiderman and Batman wondering how they could increase their powers. Superman was thinking about exposing himself to even more Earth sunlight and Spiderman about getting bitten by another radioactive spider. Batman was getting annoyed as he couldn't work out how he could go back in time to make sure his parents were killed even worse...

Anyway, back to work tomorrow. I should probably cycle in, but will steer clear of anyone else's mounts just in case.
journal writing