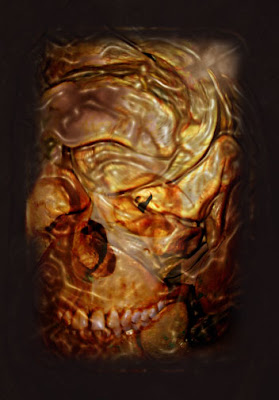 Not all nightmares are as easily described as the Dobods. One that bothered me from childhood all the way through my teenage years and (just about) into the twenties was just ... odd.

It was more a feeling than a scenario, although quite often there would be clues that one was imminent. Walking down a deserted street alongside an interminable brick wall into which every so often tiny four inch square windows were cut, revealing people's faces. Large moving machinery; often elevators large enough to contain a double decker bus. And above all, the colour.

Everything was suffused with reddish brown. The colour (I imagined) of viscera.

The main component of the dreams, though, was that things just Felt Wrong. After a while any logical components, such as walking down the street, other people, recognisable objects, broke down and I was left with just thoughts, feelings and sensations. None of which made sense. All of which contradicted themselves.

I felt enormous and weighty, constructed of massive cylinders of clay and yet simultaneously I was a tiny spun glass structure frightening in its delicacy; I was a microscopic capillary, pumping blood one cell at a time, across an enormous hot slab of muscle - which was also me. There was a voice in my ear whispering terrible secrets almost too quietly to be heard which was also shrieking at maximum volume until its throat went raw. I was many and I was one, which was also many. And one. (And many).

And what happened to time... this is the feeling that is almost impossible to put into words. I can feel it on the edge of my mind, but any attempt to put it into language nullifies it. But here goes anyway. I was aware of something that took a split second which was also a year. It had only just happened and had been in place for centuries. Someone was treating it as if it was permanent when it was fleeting.

For some reason I found this absolutely terrifying and almost unable to bear.

The worst thing of all was that upon waking, the feelings of despair and having Gone Wrong remained. I would get up, whimper, switch on the light, go to the toilet and yet the Wrongness would still be there. I would even try to read something banal to banish the spell, but it never seemed to work. I would lie back down in the dark as the distorted impression of reality played out, although by now it was a little weaker. Eventually I would fall back into normal sleep.

And I could never explain it to people. What with this and the dobods I mentioned yesterday it's no wonder that I was afraid of sleep for most of my childhood.

Eventually the fear disappeared. I'd still have dreams containing these illogical feelings but for some reason they'd ceased to bother me. After a couple of years they gave up all together. Of course I still have nightmares, but these days they tend to be banal, based on anxiety.

And I still have very odd dream experiences whilst asleep but these are interesting rather than frightening. Perhaps these are just Gone Wrong episodes seen from an adult perspective?