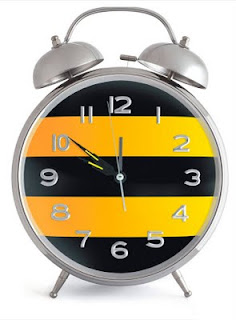 The alarm clock failed to wake me up this morning. Then again is that entirely fair? The alarm clock is either switched on or off - I do that. If it's switched on it will ring at the time for which it is set. By me. So if I don't wake up it is entirely my fault. The clock didn't fail - it's an inanimate object, it can't fail. I failed. Then again as an inanimate object it doesn't need people to be "fair" to it either.

I don't have an alarm clock, by the way. I use the alarm function on my mobile phone. But my original point still stands.

Inanimate objects, no matter how much it may seem otherwise, are incapable of behaving in a passive-aggressive manner. In fact they're incapable of behaving at all - that's what inanimate means. When it seems as if everything is ranged against us, it's usually a reflection of our own state. We are disorganised, unprepared; our own inadequacies are flinging obstacles in our path.

I don't know why I'm saying "we" here when I'm actually talking about myself. I'm probably trying to involve others by association to spread the blame. Whilst I am sure other people do behave like this, I can only speak for myself.

It's probably part of some kind of victimisation response - rather than acknowledge the flaws in our own characters, we end up blaming this alarm clock, that mobile phone and the other computer; we become Basil Fawlty giving his car a damned good thrashing. Sometimes it is important to admit "I fucked up."

It's very difficult to do so; behaviorally, it goes against the grain. It's likely that evolution selects against it rather strongly; any early humans predisposed to admitting their guilt probably got smacked round the head with a bone club and thrown to the leopard. As a result the human race evolved into a species consisting mainly of passive-aggressive and plain-simple-aggressive members.

Now we're fighting to unlearn that behaviour, to unpick those genes.

Sometimes I feel suspicious of the term "passive-aggressive". When I'm in a distrustful mood it feels to me as if it was very likely coined by a bully to justify their persecution of victims, but then again that's probably me being passive-aggressive myself, hitting out at the identification of a behaviour that might be applied to me.

However I do think that a related term, "malicious compliance", was coined by those who've fallen foul of it. What it boils down to is doing as you are told even if you realise it's a bad decision. Apparently this is being malicious. That doesn't sit right with me. In many situations, rule number one is do as you are told.

This does sound very much like superiors attempting to shift the blame downrank. Imagine, in wartime an officer orders his men to go over the top, with the result that ninety percent of them are killed. A bad decision by the officer? No, the dead men were clearly all being maliciously compliant.
journal psychology