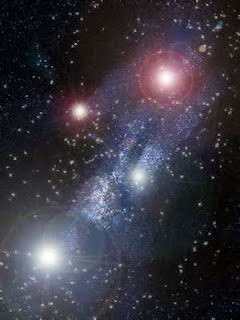 It's been a while since I've been anywhere with really dark skies. There's too much light pollution around. Sometimes when I've been up in Scotland the skies have been moderately impressive, but I haven't seen terrifying numbers of stars since being somewhere on the Norfolk Broads in the mid-nineties.

Do you know what I mean by terrifying stars? Too many to count in a pitch black sky; the Milky Way as plain as a pikestaff. It's deep space and it's right there. It makes me want to rush inside to hide and yet at the same time it's strangely compelling - I want to lie flat stare up into the sky and go mad. It's almost like Asimov's Nightfall.

I am not sure why such a sight should be so alarming; perhaps it's the vast numbers and distances involved. Our minds are not accustomed to dealing with such things and now we no longer have the gods to blame everything on, there's no one in charge. Just like the very small, the arena of the very large is where the real world as we know it breaks down and once more everything becomes simply vectors and mathematics.

I think it's also the time involved that is perturbing. Due to the ridiculously low speed of light, as we look out into space we're also looking back in time. The Sun is eight minutes ago, Jupiter about three quarters of an hour ago and the various stars anything from decades to thousands of years distant. How far back can we go?

The furthest we can see with the naked eye is two million years, but telescopes have taken us much further back than that. Radio telescopes can see back to before there were any stars, back the original microwave soup - detectable now via the cosmic background radiation. It's near impossible to see any further back in time - there wasn't any time before then. Fourteen billion years is as long ago as it gets.

This is one of the areas where my lack of detailed knowledge - in this case of cosmology - lets me down somewhat. It would seem to me that this boundary in time, this age of the universe, would therefore be directly linked to the size of the universe. If nothing can travel faster than light, then even if the universe has been expanding at the speed of light since the Big Bang, no location in the universe can possibly be more than fourteen billion light years from any other, which leads us to the intriguing possibility that when looking at the edge of the observable universe in two directions 180 degrees from each other, we're actually looking at the same point...

Except apparently it ain't so. Scientists do talk about the "observable universe" i.e a bubble fourteen billion light years in radius but also imply that there are other areas outside this bubble which we can never know about as light from them hasn't had time to reach us. In which case what I want to know is how they got there without travelling above the speed of light if the universe exploded into existence at a single point.

I'm probably thinking about it wrongly, but it would kind of make sense (to me) if the speed of light was the speed at which the universe was expanding - that's why it's built into everything.

Whatever the case, I'm looking forward to the next time I can frighten myself with a really dark night sky.
journal science space time