"...her speech is nothing
Yet the unshaped use of it doth move
The hearers to collections. They aim at it
And botch the words up fit to their own thoughts;
Which, as her winks, and nods, and gestures yield them"
Shakespeare, Hamlet 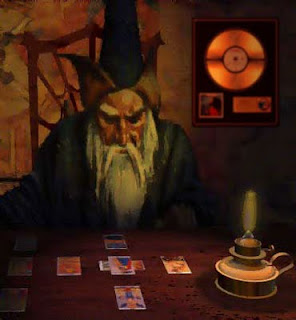 I've always had a lot of time for the Tarot. On the one hand I'm sure there isn't literally a lot of power in them little cards, namely you couldn't put two Rider-Waite decks in an occult blender and extract enough magic juice to levitate a three pound toad for seventeen minutes. On the other hand I think they can be a very useful tool for opening a window into our subconscious.

It is popularly believed that the cards have paranormal significance, but for much of their existence they were simply used for playing games; it's only in recent centuries that they acquired arcane cachet. They're largely used for fortune telling now - but of course you can use almost anything that throws up random patterns for divination, reading the tea leaves for example. You could even chop up a Monopoly board into its component squares and practice a form of cartomancy. And if people stopped playing Monopoly itself the squares would start to acquire mystical significance. I see a short spell in a correctional institution in your future...

But it is of course possible that over their development they came to incorporate certain cultural and mental archetypes, especially into the Major Arcana. If this is the case then I think this is from where they really draw their power. They represent aspects of our minds and we see in them what we want to see. They allow us to look at elements of our lives in new and interesting ways and catalyse lateral thinking or uncover patterns we were previously unaware of. Fortune tellers are facilitators of this process, mental midwives.

Of course the human brain is very good at seeing patterns and often sees them where there are none. It is how we make sense of the world. We twist the world around us into significant shapes that confirm we're real, that our mind, our ME, isn't just a fleeting collection of electrical impulses. That's why I think pop music is still so popular, if that isn't a bit of a tautology.

It's the Our Tune phenomenon - the listeners read meaning into lyrics when some of the time the lyricists are just making it up as they go along and flinging random phrases together if they sound good. Lyricists also write about their own experiences, some of which may mirror those of their listeners, but not nearly as much as the listener may think.

It doesn't mean there's anything wrong with this process, this phonomancy. If people can use pop to help themselves, to find out more about themselves then that's all well and good. We could even create a special deck of phonomantic cards each containing a gnomic lyric and perhaps a photo of the lyricist concerned. Tarock 'n' Roll!

Just as long as the users don't try suing the musicians if it all goes horribly wrong. But then again fortune tellers don't often get sued do they?

There's a bit of a gap in the market there - lawyers take note.
journal paranormal