The Shape of Numbers 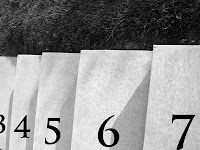 I used to think everyone saw numbers like me; but apparently not. I've always seen them as steps, initially going from left to right.

One is at the bottom of course. They increase in height as the numbers increase, shallow as flagstones at this point. Until we reach ten.

At this point there's a hairpin bend - probably consisting of eleven and twelve. By the time we get to thirteen we're heading back in the opposite direction, steeper this time. It gets steeper and steeper as we approach nineteen, then suddenly we are on a plateau again; the twenties. The final section of this group of ten is a bit steeper than the beginning, but once we reach thirty it flattens out to a plateau again.

I'm not done. As you can imagine this pattern is repeated for quite a while, but if we pull back and change scale we see a different picture. The path from one to one thousand is in fact a larger version of one to ten, with the same hairpin bend and steepening incline leading up to two thousand, and so on. I've no idea how we fit the one to one hundred shape inside each group of one hundred, but there you go...

You don't agree? How do you see numbers? I have heard that some people see them, as colours; I can't imagine that myself. My staircase scheme is strictly monochrome.

There's a similar pattern in my head when it comes to visualising years - I suppose I've mainly thought of the twentieth century in this way. It's very similar to the one for the numbers one to one hundred but there are a number of changes in point -of-view; the number steps remain the same but for some reason the camera swings around and points at them from another angle.

Up until the mid Twenties it's all pretty much as described above but then at 1928 the camera swings over the top so we're looking at 1929 from the other side and the numbers are now running right to left. There's no longer the gentle curve as described above, but more of a series of steepening arcs almost reaching vertical at 19_9 and the flattening out again at 19_0.

In the Sixties the numbers start a gentle curve towards the camera again. The camera performs another somersault in around 1973 and the numbers once more appear to be running left to right. In 1980 they begin to curve towards camera again then in 1986 there's another camera flip which is reversed in 1989. 1994 sees yet another flip so that they're heading right to left again where they remain for the rest of the century.

Time travellers during last three decades must suffer from dreadful motion sickness; no wonder Sam Tyler was so grumpy.

Does anyone else visualise numbers in this way or is it just my way of looking at it? Perhaps everyone has their own unique way of doing so, some of which make mental arithmetic easier. As it is my "stairs" are no help whatsover with adding, subtraction or long division, so I guess I'm no idiot savant.