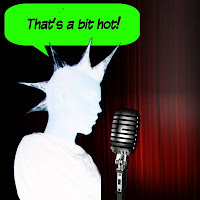 I've got a song stuck in my head, going round and around. It's bad enough at the best of times when that happens, but at least you can usually dislodge it by seeking it out on iTunes or youTube and then playing it a million times. This isn't the best of times. I can't do that in this case; I heard the song in a dream the other night, so it (probably) doesn't exist.

So I'm a bit stumped. The song was accompanied by a video; a punk singer with a green mohican stumbling around a derelict room as he sung. I can't remember the bulk of the lyrics but it seemed to be a bit of a list of words, six two-syllable words to be precise, something like:

"Outside, inside / Upside, downside / Onside, offside"

At which point he'd open a wooden hatch in the wall and lean through into the wall cavity. The next words I remember exactly:

And off he'd go again. The chorus was something like:

Hardly high art, but then what can you expect from my subconscious? Hopefully the act of having blogged it will have expunged it from my head, so apologies if this has been rather dull. But if it hasn't worked I'm going to have to actually write the song.

Odd how some bits of dreams stick in your mind though whereas others, as discussed in previous entries, evaporate. I wonder if this is related to the way some songs stick in your head? I like the term for such songs, Earworm from the German Ohrwurm. There is an article about earworms on Wikipedia but it's not very long. If I'm going to find out more I'm going to have to dig a little deeper. I'll get back to you - by its very nature this morning blog is supposed to be off the cuff; anything requiring real research will take a little longer. But I think earworms require further investigation.

Warning! Metablog content to follow. I am at home today, so this entry is by necessity a little later than on a normal weekday, sorry. However, I am pleased that I've managed to keep it up on a daily basis thus far; nearly a month. It has definitely become an official habit burned into the neural pathways of my brain. I might take advantage of this compulsion with respect to finishing my novel - so the blog entries may become every two days. On the days off I'll be chronicling Genie's Adventures in Underland.

But not quite yet. I've got earworms to hunt.
dreams journal music

Wrote this nonsense on 22/8/09 to accompany a new tune I made up at home and recorded badly with the help of garage band. The words were made up on the spot and could be a lot better. I was surprised to see some lyrical similarities to the song in the dream!!!!!

Also had a crack at it with me fellow Foundlings at the last rehearsal on 2/9/09, 2 takes were demoed for future reference, it has the working title of stitch and contains some of the word mentioned in the song from the dream! THESE LYRICS ARE PRETTY AWFUL and are complete nonsense, but I found the similarities interesting, I think the song in the dream is probably much better. 4 or 5 words are the same.

OFF YOU GO
UP TO UP TO
ON YOU GO
SET TO, SET TO

ONSIDE INSIDE
TURN ON TURN OUT
UPSIDE DOWNSIDE
TURN FROM, TURN FROM

IN TO, IN TO
SWITCH THROUGH
STITCH TO

COME ON COME OFF
SOLIST STEP TO STEP
FRONT STEP BACK STEP
REST THROUGH, RUN TOO

SO ON AND ON
FLIT THROUGH SIFT THROUGH

GO ON AND ON
SIT THROUGH
STAND STILL TO

ARE YOU OFF OR SWITCHED ON
ARE YOU PROTON OR ELECTRON

IS IT IS OR IS IT NOT
OR ANOTHER SIMMERING HOT SHOT
LET'S HAVE ANOTHER RUN THROUGH.

Catmachine said…
That's weird. I wonder if the rehearsal room looks like the derelict room in the dream?