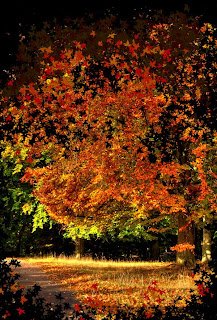 It is hard to believe that I was swimming in the sea only last Monday, given the behaviour of the intervening days. Even though in theory the weather shouldn't know what month we humans call it, somehow it knows it's now September and can therefore stop making an effort.

Bloody September. There's something about early September in particular that induces depression, the early tell-tale symptoms of SAD. It's the academic year in the UK that has of course coloured my impression of this month. In general, like so many children, I loathed school with a vengeance, so it's no surprise that the approaching menace of the Autumn Term felt like the end of the world.

Dampness and dead leaves; to these add the smells of floor polish, mothballs and revolting wads of chewing gum stuck to the underside of battered wooden desks so ancient they still had inkwells. Simmer over the heat of Victorian radiators in a dungeon-like room containing thirty teenage boys; drizzle with chalk dust. This is the aromatherapy recipe for despair.

The inevitability of the autumn term made early September feel like Sunday evening writ large. Eking out the last few scraps of pleasure from those final days of freedom was the equivalent of Sunday night TV - I really didn't really get that much pleasure out of That's Life or The Waltons, but it was better than what awaited me on Monday morning.

Fortunately, the Autumn Term never seemed to start on a Monday, so I never had to suffer the double whammy. For some reason it was always Friday, although unfortunately for most of my childhood and adolescence I also used to have to go to school on Saturdays, so it's not as if it was just one day followed by a weekend to get over the shock to the system. However, I don't think I'm going to discuss school any further now - I'll save crucifying them for a later date.

All of that's behind me now, but working as I do in a university means that my biorhythms are still attuned to the academic cycle, and the onset of September still has the power to alter my mood for the worse. It's partly because its arrival means that by now the year's as good as over. There goes another sliver of my life as we fast forward into the future. As I have observed before, the 21st Century has been put on at the wrong speed, and I'd appreciate it if we could start again, or at least if it could be turned back to 33rpm.

I think the weather heard me casting aspersions - it now looks hot and bright out there. I'd better go and make the most of it while I can.
journal