Am I Addicted Yet? 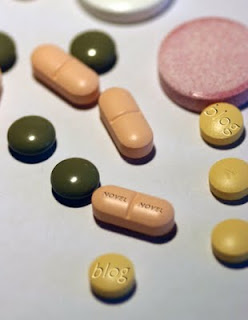 I would have liked to write about earworms and the evolutionary significance of music this morning, but haven't had time to do enough research. There's a lot of it out there but it's difficult to find time to sort the wheat from the chaff from the far too complex.

So this morning I am beginning to write without any idea where it's going. I am determined not the break the flow; I have to write something in order to keep up my side of the bargain. Of course the other side of the bargain is mine as well; that's the problem with forcing yourself to do something. I realise that this is in danger of becoming a metablog entry; I must need one of these right now, I obviously need to break the first rule of daily blog every so often.

It's a shame that it hasn't quite yet become an addiction; even though I am still managing to force myself to write every day, it would still be easier not to (no matter how bad that would make me feel). I don't know how long you have to do something before it becomes a habit and then an addiction. I've kept this up for nearly two months now. Some might say that is reason enough to assume I've become addicted despite any protestations to the contrary. Well, maybe. But what happens on non-blogging days?

I'm supposed to be writing my novel. I have varying degrees of success there. I usually manage to do something; even if it's tweaking a sentence or going though a passage rewriting it to make it more convincing. But it's not as successful as writing this blog; I'm not getting 500 words done every other day. Some days I get 700 or even 1000; on others I'm lucky if I get 50. I suppose it could partly be because no-one sees the novel whereas (in theory) people are reading this and would notice if I didn't post at all, even if it's only something like today's aimless ramble.

So it can't be a true habit yet; if it was I'd be banging out the novel as fast as I bang out this.

But this novel, like some of its protagonists, is a contrary beast. Sometimes I'll be inspired and end up writing 1500 words on the same day as a writing a blog entry. I get the feeling the story is all in there somewhere I just need to uncover it. Sometimes it's buried deep and so the spadework is slow and tedious; at other times it's just below the surface and so all I need is a broom to brush away the sand; if the wind's in the right direction it almost writes itself. Sometimes I'm as surprised as I hope my future readers will be by the turn of events.

I'm sure now that if I didn't have a day job I'd be able to finish it very soon. Sadly I do have to go to work, so it all comes down to time.

My old adversary, Time. Who, if you are to believe one of my earlier blog entries, doesn't actually exist. So what's my real excuse?
fiction journal metablog time writing

Don't know how far you are with you novel and also whether you feel ready for public scrutiny yet, but you can upload sample for people to read as a virtual page turning book courtesy of bookbuzzr.com and then start pointing people in its direction via Twitter.

You can monitor exact numbers of visitors via you profile page. Whether any one leaves comments is a different matter.

Catmachine said…
Thanks for the tip - I'll bear it in mind when I'm near completion of the first draft (currently about half way through).