Do Not Go Gentle

"Being born is not a crime, so why must it carry a sentence of death?"
Robert Ettinger 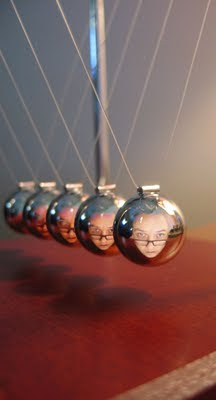 Who wants to live forever?

To be honest, I wouldn't mind. No really. Sometimes I think anyone who doesn't want to live forever quite clearly hasn't properly understood the concept of death. Perhaps this attitude of mine is being affected by my current reading matter; as any regular readers of this blog may have noticed I'm attempting to give my mind a workout by reading a lot of philosophical and scientific texts on the nature of consciousness, the nature of being. One thing that the Champions of Physicalism seem to delight in gleefully pointing out is that we are no more than the sum of our parts, that this is all there is and that we're all going to die. We're all going to stop. Sometimes this becomes horribly clear to me in the middle of the night and I go cold with terror.

Something must be done. It may be an illusion, but I'm quite attached to being sentient. I may not have seen attack ships on fire off the Shoulder of Orion but I'm equally loathe to see some of my favourite experiences lost forever like sweat in a shower. I want more life, fucker.

There's no real physical reason for us to run down and fall apart. If, as we are often told, every cell in our body is replaced on a seven year cycle then surely the seven years is the maximum amount of aging we should have to put up with? And whilst we're on the subject, why have I still got that scar?

It's entropy again. After a while the DNA in our cells starts to get damaged and make mistakes, passing these mistakes onto its descendants - although cancer cells seem to be immune from this process of degeneration, which is absolutely typical (and which also means that if we could find some way of making ourselves out of cancer, we'd live forever).

"Every time I learn something new it pushes some old stuff out of my brain."
Homer Simpson

Even if we did crack the problem of physically aging, we'd almost certainly come up against another problem sooner or later. Capacity. Specifically, somewhere to store all our memories. Unless we want to start carrying around USB Brain Extensions we're going to have to start archiving our older experiences. Mental decluttering.

This is fair enough but seeing as our personalities may very well be the sum of our memories, some two thousand years down the line we might end up a completely different person, which for some people, like our friend Roy Batty to whom I obliquely referred above, would completely defeat the purpose of living forever.

It wouldn't bother me though. There'd still be an unbroken thread of consciousness reaching back through my lives and anyway, it would be fun to turn into someone else every couple of hundred years. It would be like reincarnation without having to believe in all the Weird Shit.

This idea has implications for identity and linear time as well, but I think I'll go into those on another occasion. Right now I'm trying to work out how I can move my memories of secondary school onto an external hard disk. And then burn it.
age aging body entropy journal mind philosophy time

Anonymous said…
hi..the first word i had read in your blog was who wants to live forever?well..i guess living forever is cool but when i am thinking bout people without deaths it gives me a kind of feeling that they might not gonna value our lives or we might not gonna want to have a dream to pursue..so i guess having a death in this world is much cool..