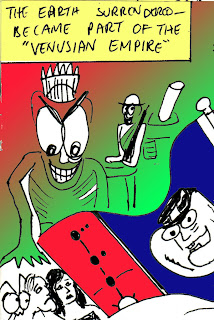 I started writing when I was a kid. Aside from short pieces of creative writing, my childhood magna opera were comics drawn in biro. The first was about a giant called Bigfoot who was "twenty five miles high" and arrived on Earth and proceded to get into a rage.

I'm not quite sure how I managed to sustain this wafer thin premise for as long as I did; perhaps by being derivative. In the Bigfoot in Space sequence he did meet Luke Skywalker, Darth Vader, K9 and the crew of the Liberator...

I moved on to a series of comics about the exploration of the Solar System starring Captain Dawswell. For some reason this one astronaut was involved in the first mission to every single planet. Apart from Pluto, which wasn't a planet at all (was I a bit ahead of my time there?) but which turned out to be a massive space station built by dolphins.

Furthermore, flying in the face of the best evidence of the time, every single planet in the Solar System seemed to harbour some kind of life. From the tiny armoured bugs of Mercury to the "Greenies" on Venus who were in fact an alternate version of the human race created by interfering aliens transplanting a group of Australopithecine ape men from Africa to Venus three million years ago. They developed faster than their cousins on Earth; their industrialisation inducing irreversible climate change and a runaway greenhouse effect so that by the present day they were all living in underground bunkers.

There was a complex hive-based civilisation of insects on Mars. Balloon creatures roamed the atmosphere of Jupiter whilst living jet-planes with three sexes did likewise on Saturn. I think I'd started to run out of steam at this point, as both Uranus and Neptune were inhabited by the same species; telepaths with enormous transmitter dishes on their heads.

For some reason the rest of the galaxy appeared to be inhabited by giants (this explained where Bigfoot came from). Oh and life itself was an infectious disease that our galaxy was discovered to be suffering from.

The first comic in the sequence and therefore Captain Dawswell's first mission was called "2009: The Mission to Mars".

At the time I remember being deliberately conservative with the date. Even though it was still the seventies I could tell that Arthur C Clarke's vision of an extensive Moon Base and a Jupiter Mission by 2001 was a bit far fetched. However, I had no idea just how far fetched and would have been disappointed to learn that in the alleged year of Dawswell's first mission NASA would still be all of a dither as to how they planned to ferry people up to the space station once the space shuttle was retired in 2010.

My general space disappointment has been documented in another blog entry; I think it's worth expressing again here. Come on Obama, get your finger out. Once you've sorted out world peace how about giving the space program a kick up the proverbial?

After all, no other president has ever starred in in own comic before. Why not make it an exciting comic?
comics journal NASA SF space writing