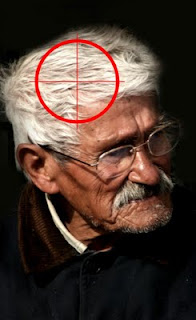 Quite why anyone would actually want to go back in time and shoot their own grandfather is beyond me. It's said so glibly and yet I'm forced to think that even if I possessed a time machine and a desire for grandpatricide, I would have absolutely no idea how to go about procuring a gun.

Nevertheless this rather bloodthirsty scenario is often cited as a clinching proof of the impossibility of time travel. I'm not so sure. I feel sure it could be solved given the application of Many Worlds Theory (MWT). Broadly put, Many Worlds Theory states that everything that can happen, did happen. That is not to say that the universe is watching and decides to split in two every time you toss a coin; it's more that at a very basic quantum level everything happens. We can work upwards from that. This means that Schrödinger's famous cat is alive in one universe and dead in another - no spooky co-existence in both states until observed is necessary.

Mind you, I wouldn't be surprised if the sort of people who go around locking a cat in a box with a vial of prussic acid aren't the same sort of sickos who might indeed entertain thoughts of popping a cap in grandpa's ass just for the hell of it.

Anyway, all that happens under MWT is that they go back and terminate grandpa only to return to their own time and discover that they're in a universe in which grandpa was killed and subsequently their branch of the family doesn't exist. This doesn't mean that they've changed history; their original world of departure still exists and some might say it's now a far better place for the absence of a gun toting time travelling maniac.

MWT also has some other interesting side effects. Have you ever wondered why you're not dead yet? Seriously, loads of other people have died, why not you? Or me?

Maybe we already have in some of the many worlds; the thing is that in those worlds there's no spark of consciousness for us to inhabit so we don't notice them. We only remain aware of those worlds where we carry on existing. In theory this means that every one of us is going to live to a ripe old age where we consider how lucky we are to have dodged all those bullets.

However, just because we've ended up in a Very Old People's Home in one world there's no reason whatsoever that any of our contemporaries will end up in that same world. In many of the other worlds people will have seen us die but from our point of view we're fine - this is almost the Anthropic Principle applied on a personal level. I'm all right Jack, and so are you, but not necessarily in the same universe.

I do hope the Very Old People's Home isn't filled with octogenarians rambling on about how they narrowly escaped death back in their twenties when a mysterious stranger appeared in their bedroom and tried to shoot them.
grandfather paradox journal many worlds interpretation parallel universe quantum immortality quantum theory science time

Sulci Collective said…
Forever my problem with "the Terminator" films. In fact I wrote a play on the very subject,where a future of emasculated men send back an assassin to kill the women in the past whose ideas elevated women and gay men to all the seats of power... Unfortunately for the assassin he lands in a sink Council estate... It never got produced, despite my marvellous set design as a cross between Mondrian and the set for "Dogville"...

You might be v. interested in a book called "Sum" 40 short tales of the afterlife by a neuroscientist called David Eagleman. I think it will be right down your strasse.