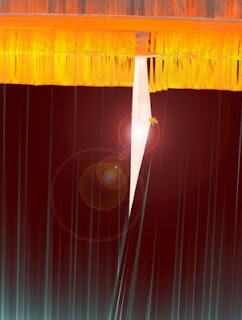 Some mornings it seems as if my body will do almost anything to remain asleep. Even if I seem to have been wake for a while, as soon as the alarm goes off I contrive to have somehow been asleep again and in the middle of an interesting dream (this morning I was riding a galloping horse along Marine Parade). They say that we need eight hours sleep; for me that's just not enough. Ten maybe. If I'm ever given the opportunity we'll see. Perhaps I should go to bed at 8pm one night and see what happens.

Of course it was very different when I was a child. Back then I couldn't wait to get up (although I can be forgiven for this bearing in mind how early I had to go to bed). There was none of this lying around making false promises to myself - in a minute, honestly - as soon as I was awake that was it. I was pleased to be free of sleep's clutches.

Given the recurring nightmares I had, some of which I described in an earlier blog entry, that's no real surprise. Wakefulness was a far safer place. The producers of my dreams had seen how successfully the Dobods had scared the pants off me and, like the producers of sixties Doctor Who trying to emulate the success of the Daleks, tried to come up with more monsters that would wake me in terror.

And just like the producers of sixties Doctor Who they had limited success. After the Dobods, the main villains were called the Gagas. An uninspired name, but then again what do you expect; I was only two or three. They looked more interesting than they sounded. Picture the side of an end-of terrace tenement block - a huge rectangular expanse of windowless brick tapering off at the top to a many flued chimney. Now picture this shape made instead of a soft, grey organic looking material, flexible, rounded at the edges. A Gaga. They towered over me and seemed to come in pairs. I can't remember what else they did, nor what made them so frightening, although there's a sense that I was afraid they'd fall over and crush me.

The only other monsters that I can recall wandering the childhood dreamscape in any great numbers were the Wyves. Unlike the Gagas, the name was considerably more impressive than the creatures themselves. The Wyves seemed to consist of no more or less than the chinks of light seem underneath an ill fitting curtain; short horizontal slivers of radiance. I don't remember them doing anything, I just feared them.

But then again I do have an irrational fear of chinks of light showing through curtains, especially that wicked looking V that appears at the top where the two curtains meet. It's the V from the word evil, I tell you. Even now if staying in an unfamiliar room I always check the curtains before going to bed to make sure there are no Evil Vs lurking, to cast frightening shapes on the wall when cars drive past and to hang there terrifying me when it first starts getting light.

Being afraid of what might be lurking in the dark is good; it means your mind is still alive and imagination active. In retrospect I almost enjoy it.

At the time it is terrible, and that's the point.
dreams journal monsters sleep

Sulci Collective said…
Can't really recall childhood dreams. Teenager ones always anxiety laden about being late for school bus or leaving homework behind and getting into trouble even though I'd done it. Still dreams about these after I left College.

Now my dreams are mainly me narrating naratives in words rather than images and pictures. Must mean I'm a writer then...
Wednesday, October 14, 2009 2:04:00 pm