You Can't Keep A Good Meme Down 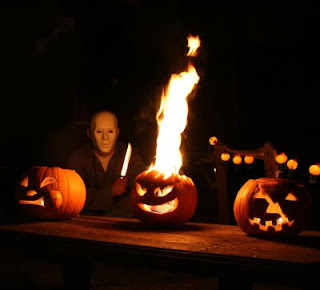 I find it oddly satisfying that this evening many people will be celebrating something far older than Christianity. I'm talking about Halloween of course which, despite a determined hijacking by the greeting card industry and modern association with horror movies, is still basically the modern interpretation of the Celtic festival of Samhain which was being celebrated before Jesus was even a twinkle in the Holy Ghost's eye.

It's surprising that a relatively small scale meme as Samhain has survived the two thousand year onslaught of such a powerful meme-complex as Christianity, which is fundamentally opposed to it. The word Halloween itself is a Christian invention. In an attempt to stamp out the popular pagan celebration, Pope Gregory III moved All Saint's Day (and therefore obviously the previous day, All Hallow's Eve) from mid-May to the beginning of November. All he ended up doing was giving it a more catchy name that's easier to spell.

So what is it about Halloween that's so enduring and that will probably outlast modern monotheism, despite the way the latter has shaped the modern world? I suppose it's partly because the Jack O'Lantern character looks and sounds a lot more fun than Jesus; more of a Trickster than a Preacherman and they're always more engaging. But mainly because it taps into something more basic; Samhain is a celebration of the start of the dark half of the year, and the cycle of the seasons is something that's been around a lot longer than any of us; in fact it shaped our species.

This is why some memes never die; they've made themselves part of us so can't be supplanted.

For instance, I find it fascinating that Ancient Egyptian imagery has survived so long. From the very beginning, Egypt was subject to constant invasion; it was after all a prime bit of African real estate with inbuilt desert irrigation. Yet instead of the invaders burning the idols and forcing their own belief system on the country they themselves ended up being mentally colonised by Isis, Osiris et al. Even when powerful empires such as the Greeks and then later the Romans added Egypt to their territories they found themselves seduced by the animal-heads.

Early Christian imagery in Egypt can be fascinating, showing as it does Jesus on the cross accompanied by Horus and Anubis; some have claimed that the only reason the Virgin Mary was so bigged-up in the first place was to win over the hordes of Isis worshipers (compare depictions of Madonna and Child with the Egyptian imagery of Isis nursing Horus).

Even today in modern Egypt, industrial and Islamic as it is, the imagery and iconography of pharaonic times are everywhere. Ramses II, who ruled Egypt well over three thousand years ago, is still revered and gives his name to railway stations and squares.

What's not clear is why this imagery is so powerful. What part of our minds does it resonate with, what does it tap into, and how did it shape us?

Global warming + GM food may obviate the seasons and the need to mark them. A constant neon lit firmament would even do away with the soltices (have you been to Leicester Square recently? The birds sing 24-7 cos their circadian rhythms have been trashed by the neon lighting).

Beast-men symbology presumably alludes to mankind's fantastic propensity for imitation - for learning to dress in furs, smear ourselves in scents culled from killed prey and learn to move like the animals in order to approach them unseen and make hunting more successfully. We have both stopped bothering to honour the ways of beasts in such a way as we hunt by trap, gun and poison and in doing so, apart from wiping out the species wholesale, we no longer acknowledge the beast within ourselves, which is where organised religions come in; trying to elevate us from the base and animalistic to some sort of spiritually pure being squatting upon fluffy clouds.