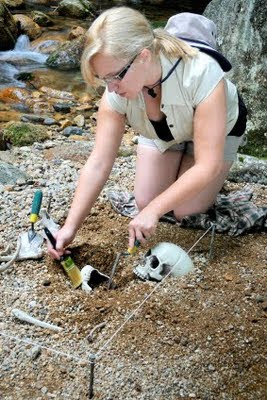 On alternate mornings when I'm writing my novel instead of this blog, I have noticed something odd. Interesting, pleasing even, but still odd.

It's that there are bits I don't remember writing. I don't know whether it's because when I wrote them it was first thing in the morning and I wasn't fully awake, or whether it's because my subconscious is using my brain to write a novel when I'm not paying attention. Whichever it is, I occasionally have the uncanny experience of enjoying reading passages in the same way that I'd enjoy someone else's work - without foreknowledge. Peculiarly, these blog entries are incapable of surprising me in the same way; when I read them back I remember every word and am particularly sensitive to flaws, to repeated words or phrases.

It's just the fiction that appears to come from somewhere else and is capable of being written without touching the sides as it comes out.

This isn't entirely a surprise; I often get the feeling when writing that I'm uncovering something that already exists and I'm merely doing the spadework getting it into the light of day. This doesn't happen with short stories - and perhaps that's why I don't feel I'm particularly good at the medium. With a short story you have to know the whole structure before you start; often the climax, the sting in the tale is the first thing that comes to you. I lose interest.

It's different with a novel; I am interested and excited to see how things are going to turn out. I have some rough idea of the shape of the terrain ahead, but often if I've made too many plans the story becomes a contrary snake and writhes away into new and unexpected quarters. Planned characters go AWOL and brand new ones turn up fully formed and ready for work.

Not everyone works like this. Many writers have everything planned down to the letter; charts on the wall, spider diagrams, timelines. They can't even start until they know how they're going to end and they stick to the plan. And of course this is just as valid a way of doing things; some might say it's more valid as at least these writers know what they're doing...

Personally I think the world has room for both varieties of storyteller, the Archaeologist and the Architect. The end result in each case is a magnificent edifice (or at least a functional premises), so the method by which they go about bringing these into the world is irrelevant.

Do the Architects enjoy themselves as much during the creative process? Not being one I don't know. I can only assume that there are different aspects of the process from which they draw just as much pleasure as I, an Archaeologist, draw from discovering what's going to happen next. I am delighted when characters start taking over and acting of what appears like their own free will.

I assume Architects aren't bothered about spoilers either.
journal writing

Sulci Collective said…
It's a bit like those notions of the sculpture pre-existing within the marble block and the artist having to chip away to uncover it.

As an archeologist writer I could never plan anything before I start to write word one. I have some ideas swimming around yes, but for me the creative process is also keeping it fresh for me - seeing where the characters and language takes me.

I firmly believe you can't write outside of yourself - that even if an experience hasn't happened to you directly, you've absorbed it by witnessing it, or reading it, or seeing a TV programme or whatever. The fact that it struck a chord with you enough to be filed/buried in your memory means you have begun to work on it in your mind. The creative process is putting together associations from sifting all the terabytes of memory stored in your brain and unleashing new meanings from them. They pre-exist in your head, which may partly explain them emerging whole, but what is fascinating is how they get thrown out with this new associative and interpretive spin on them - on an unconscious level your brain has been working on the seam for a while, so that when you quarry it for your writing, it appears to come out unworked and of a piece.

Language is the touchstone for all of this - like the associations of dream imagery, or Freud's parapraxes - the connections are being made at a lingual level, but one buried deep ffrom the conscious level.
Friday, November 06, 2009 9:05:00 am