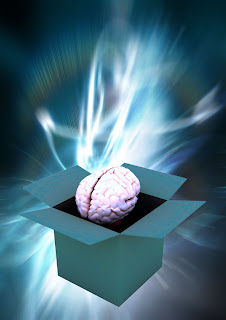 I realise that in the last entry I made a fundamental error describing the death and birth as a "border" in the sense I was using it. Whilst they are points on a boundary between being and not-being, they're not points on a border that anyone can cross. So I reiterate that there isn't really such a thing as being dead.

One could say that not being alive is describable, if only as the absence of an actual state, but actually having a word for it, dead, seems odd when you think about it. After all, we don't have a separate word for not being in pain, despite the fact that (hopefully) it is the state in which we spend most of our lives.

You might think I'm playing games with words here. That might be the case, but words themselves are immensely powerful. In my continuing study into what makes us into conscious, I have discovered (mainly through reading and thought experiments as practical investigation in this field is tricky for the amateur) that in a very real sense you are what you speak and that language probably plays a big part in the generation of consciousness. But more of that on another occasion when I understand it better.

Last time I used the analogy of people living in different countries to think about the implications of people living at different times. In doing so I came to realise that in some ways they were actually the same thing. If birth and death are merely points on the single boundary between between being and not-being, where does the boundary link up? Where is the boundary, say, when we're in the middle of our life?

It could be our skin. That is after all where being and not-being start in everyday life. However, we often mentally extend our selves beyond our bodies, for instance when driving a car. So perhaps it would make more sense to describe the boundary as the edge of our sensorium. Logically this makes more sense as strictly speaking our skin still exists when we no longer do, whereas whatever lies behind that mountain is as unreachable in the present moment as whatever lies a year before our birth or a year after our death. In all three cases, our sensorium stops before it reaches that point in spacetime.

Thinking about ourselves in spacetime and this boundary between being and not-being, it would seem that our self consists of a four dimensional bubble in spacetime (perhaps more of a long sausage or piece of string, seeing as we cover much more of the time dimension that we do of the space dimensions). If this bubble is the boundary of our sensorium then it could be thought of as mirrored, reflecting the universe around it. In which case each of us is a miniature, inverted copy of the universe, a shiny conscious thread embedded in it along the time axis.

As Carl Sagan once said, "We are a way for the universe to know itself."
birth body boundaries brain death journal life mind philosophy