"Sorry, did I say something wrong?" said Marvin, dragging himself on regardless. "Pardon me for breathing, which I never do anyway so I don't know why I bother to say it, oh god, I'm so depressed."
Douglas Adams, The Hitch-hikers Guide to the Galaxy 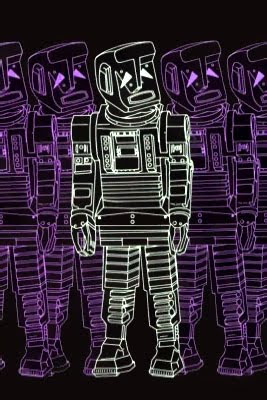 Now that we have our thought experiment of me-as-robot fully set up in the Thought Lab, it's time to start playing with it.

There are any number of advantages to my new state. Instead of having to struggle with contact lenses and then having to hold small print documents at arms length, I can simply upgrade and get a new pair of peepers from eyeBay. And I'm sure once I get the mechanism calibrated I can do away with all that getting tired stuff and simply go onto standby at the end of the day; no more tedious insomnia.

It's only when I start talking about it in this manner that it becomes apparent how complex the human machine is. How many of these things I think I could do without, or could do better with a mechanical version, are in fact an essential part of me? I'm not talking about something obvious like bad eyes or missing teeth; what about, say, depression?

Some depression might survive the transition into a posthuman state. Any depression that comes about as a result of genetic predisposition or bad learning will be duplicated in the new metal brain during the process of neuron replacement. Of course once the brain is wholly artificial it might be easier to fix this faulty wiring, but then the question "Would I still be me?" raises its annoying head.

I'd like to think I would, that I'm not defined by a negative outlook on the universe. And I've changed character quite naturally over the organic years, why should any changes brought about after the conversion to droidhood be any less valid?

Not all depression is built in though, or at least if it is, it's a side effect of a faulty part. I already tinker with this faulty mechanism when I take SSRIs so any equivalent repair of the apparatus post ascension should be allowed. If anything a repair and rewiring is likely to be far less damaging to the body in the long run than a close long term acquaintance with members of the Family Prozac.

However, I'm not even sure the second variety, chemical depression, would necessary be duplicated. The root cause seems to be neurotransmitter failure, and we only need neurotransmitters because the nervous system is a printed circuit wrought from flesh. An electronic brain needs no such chemicals, you can join metal nerves together with a soldering iron if you have to.

I'm oversimplifying here. One of the most amazing things about the human brain is how adaptable it is, the way neurons can make, break and change their connections. My mecha-brain will have to do all that as well, so I'll have to do better than solder. Multidimensional nanotech jumpers perhaps.

An interesting side point is that the drug Ecstasy has its effect due to a similar mechanism to SSRIs, an optimisation of the serotonin transmitter mechanism... Does that mean that a perfectly functioning, chemically idealised human body and an artificial body both feel like they're permanently on E? Sorted.

But of course depressive disorders are to emotion as oranges are to fruit - not the only ones. How am I going to love, hate, fear or become aroused without my neurochemicals? Again, I hope I will be fine with electronic versions. If anything the new robo-emotions will be more efficient; we won't have to wait for the level of a particular hormone to rise beyond a certain threshold, switch it on and BAM, you're feeling it.