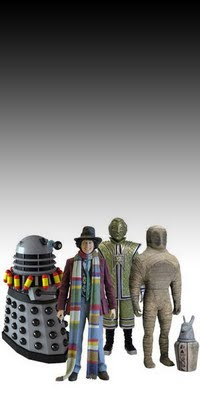 A second major problem in basing a memoir like this around Doctor Who is that as I start to describe things that happened when I was older, the memories are far better and more detailed. If I'm not careful I'm going to end up with a blow by blow account of every episode by the time I get to the 1985 hiatus which quite apart from being incredibly time consuming would probably make for very boring reading.

Another script that my dad brought home ostensibly for me to draw on the back of was EPISODE 1 of SERIAL 4C, namely The Ark in Space (1975). For some reason the pages of this one were yellow rather than the more usual white; probably some BBC colour coding scheme.

I found the story fascinating and a million miles (literally) away from the military-based runarounds and pompous galactic federations of the Pertwee years. Despite the lack of oxygen the episode was a breath of fresh air for the budding SF fan. A deserted space station in the far future with a crew in suspended animation sleeping through the poisoning of Earth by solar flares whilst watched over by an electronic defense system; the body horror of an insectoid alien menace stalking the corridors and laying its eggs in the sleeping human bodies...

I even persuaded some friends to reenact the first half of the episode at playtime. I was the Doctor, Mark Davies was Harry Sullivan and a pale girl called Catherine was persuaded to stand in for the slowly asphyxiating Sarah-Jane Smith.

Despite the bright lights, jump suits and bubble wrap of the finished product, the story stands up today as a fine example of Robert Holmes's work, and it was here that the true character of the Fourth Doctor began to make itself known, character traits even now occasionally channelled by David Tennant, right down to the "Indomitable" speech, a homage to which appeared in Utopia (2007).

The Ark in Space was also remarkable in that it was the beginning of the series's first proper story arc which lasted four serials and saw the Doctor and his companions separated from the TARDIS and...

There you are you see, I've started going into way too much detail. Lets just skim lightly over the next few years.

Not that there wasn't a lot happening. With the advent of Tom Baker I seem to recall the country being plunged into a Whomania frenzy that has only since been matched by the furore and merchandising surrounding the series's revival in 2005. Everywhere you looked there were pictures of the big-eyed bohemian buffoon in the hat and scarf.

Of course visual SF itself was to undergo a renaissance during Baker's reign, so some of the series's revived success was probably due to this. After years in the doldrums cinema served up the first installment of those famous adventures that took place a long time ago in a galaxy far, far away which was itself to spawn any number of imitators on both big and small screen. Doctor Who even gained a sibling, Blake's Seven, from the pen of the man who invented the Daleks.

We were all reading 2000AD (and briefly Starlord) whilst the Doctor himself returned to the world of comics with Doctor Who Weekly (later to become monthly - and still published today).

For me some of the finer vintages of the Doctor's adventures during this period included Hammer Horror Frankenstein homage The Brain of Morbius (1976), the Doctor once more getting bitch-slapped by someone infinitely more powerful than himself in The Pyramids of Mars (1975), the return of the Master in a portrait of a Time Lord society which was revealed to include TV anchormen, politics and limits on the number of regenerations in The Deadly Assassin (1976) plus killer art deco robots with tinfoil slippers in The Robots of Death (1977). 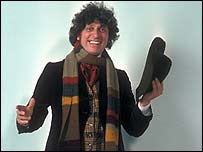 It was in around 1979 (more of a table wine really) that I first met the Doctor. I was wandering around the still relatively new Wood Green Shopping City only to pass an unusually crowded bookshop. At the centre sat the Doctor himself in full costume. I joined the queue instantly - how could I have not? As I approached the front I could hear him speaking in a bright and animated fashion.

The queueing child at the front mumbled incoherently. Not to be put off, the Doctor scribbled a personalised autograph on the poster of himself and K9 and handed it across the table, "There you are Steven!"

The queue shuffled forward until another child stood across the table from the Time Lord.

"Hello! What's your name?" Mumble, scribble, "There you are Russell!"

Well, you get the picture. Eventually I shuffled into place to find those manic alien eyes trained on me, a face beaming with amused indulgence.

"There you are Chris!"

And that was it.

Oddly enough it was shortly after this that I started getting sick of the Fourth Doctor. The relentless studied quirkiness, the jokes, the jelly babies, the endless Xcho-ness (Xcho being a term my brother and I used to describe him, based on the way he spoke). This was very similar to the way I am now beginning to tire of the Tenth Doctor's remorseless bipolar chirpy/portentous behaviour, the unflagging Awwwwww-Brilliant! Still, only two more episodes to go now and I'm sure I'll miss him when he's gone.

Back then I felt that the Fourth Doctor had outstayed his welcome. Whole generations of children were growing up remembering only him. Little was I to know that a big change was on the horizon and that entropy had him in its sights.

However I was to see him in person once more before the end. This took place on a world called Traken...

Dimensionally Transcendental Confession will return. And of its own free will.

Sulci Collective said…
The toys maybe available from wherever, but these are culled from your personal collection am I right?

Whatever the pros and cons of Tom Baker as the Doctor, the majority of monsters he had to fight were rubbish visually. And K9 gave him too much of an edge in the arms race.

Catmachine said…
No, I don't own this limited edition set, sadly. I credited Forbidden Planet as I pinched the image from their online shop so thought it only fair to drive a bit of commerce their way.

Yes I guess having a sentient mobile gun was a bit of an unfair advantage when you mention it. Luckily for the purposes of exciting narrative K9 seemed to have the battery expectancy of a cheap laptop and broke down just as often...
Tuesday, December 15, 2009 10:00:00 am