"I never use the word 'atheist' of myself; it's scarcely worth having a name for. I mean, I don't have a name for not believing in pixies..." 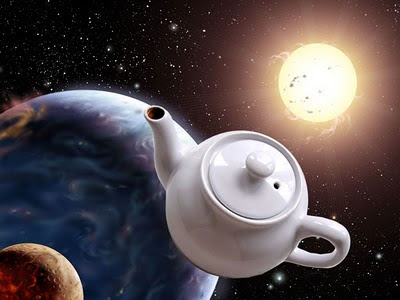 Atheism seems very popular these days. You can hardly move for events, benefits and poster campaigns. And a good job too - far better to start the new decade (which I have a horrible suspicion will end up being called The Teenies) as a largely secular people. Strictly speaking I suppose I am an atheist, being as I don't believe in a god. However, it does seem a little strange to define yourself by what you don't believe, as Jonathan Miller so clearly states in the quote opening this blog entry.

Evangelical atheists have a very convincing logical argument with which to counter the godbotherers' strident cry of "But you can't prove that god doesn't exist!", which is commonly known as the parable of the Celestial Teapot. In it Bertrand Russell put forward the idea that just as we cannot actually disprove the existence of god, so equally we can not disprove the existence of a hypothetical china teapot orbiting the sun between the orbits of Earth and Mars. This does not mean that anyone seriously believes in said teapot, but that the burden of proof exists with the believers of ridiculous things, not the disbelievers.

I don't believe in the Celestial Teapot either, but wouldn't describe myself as an Ateapotist. Why should I define myself by what I don't believe?

Of course the hardcore godless might claim that the reason they have to do so is that there are so many deluded people around and that belief in a god or gods does far more harm than good. I can see that point, but can't help but think that one reason for identifying with this particular -Ism is, ironically, out of the very basic human desire for oneupmanship, to be holier than thou (or should that be unholier than thou?) "Look, we're cleverer than them!"

There is still very much a sense that in being a rationalist one is fighting the good fight against ignorance and superstition, but is it really that much of a crusade these days? Back in the days of Galileo and Copernicus being a scientist - let alone an atheist - was a dangerous business, and had he lived in the seventeenth century Richard Dawkins may well have been imprisoned or even executed for his lack of belief.

These days that's not going to happen - when you read The God Delusion you get the distinct impression that he's preaching to the converted. Aside from Buddhism, which is unique amongst religions in that it lacks a god and perhaps should more properly be considered a philosophy than a faith, the major religions of the day are Christianity and Islam. Christianity's like a grumpy, senile old man forever droning on about the old days, about how things were so much better before these new fangled changes and about the trouble with kids these days, whilst Islam is like a belligerent teenage boy locking himself in his bedroom and plotting revenge against anyone who doesn't agree with him.

The atheist brigade pointing and laughing at them is only going to wind them up more and make them defensive and aggressive. The best thing to do with such characters is to ignore them. In due course hopefully Christianity will pop its clogs and Islam will get a girlfriend and grow out of it.

So, no, I don't believe in god. Or dragons.
humanism ideas journal people religion sceptic