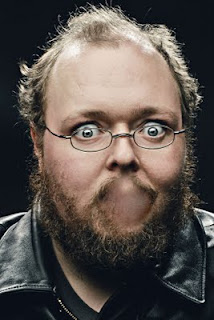 I don't know what to say.

In the past this used to get me into trouble. I'm not talking about big trouble with a capital T, it was just that when I was placed in social situations I never knew how to engage in small talk and ended up saying nothing. This meant that even the people that liked me found me hard work, and those that didn't thought I was rude and aloof. I wasn't; it was just that in the absence of any guidelines I usually ended up frozen into inactivity.

I'm somewhat better now. When placed in a social situation I've observed enough small talk and sociability over the years to be able to come up with a fairly convincing facsimile. It's always conscious though; whilst people may not find me hard work as much any more I still find them harder work than ever.

You might think that someone to whom social interaction doesn't come naturally would be cold and uncaring, ultimately selfish, but I would hope I'm not like that at all. It's true that I don't find it easy to "read" people, however, this means that I try even harder, look more closely and attempt to "read" consciously.

However, not being able to instinctively sense which way things are going to go, I start to over analyse and extrapolate, weighing up the potential pros and cons. Whilst this means that a lot of the time I do have other people's interests at heart, it's not always obvious. There are sometimes so many different possible outcomes that I end up being unable to make a decision with the result that I do nothing. Doing nothing is usually the wrong decision.

However you can't say I'm not trying.

What I do still find very difficult to understand is how selfish some people are capable of being on occasion. They've obviously been blessed with the ability to know what to say and small talk comes naturally to them. They can read people and know what someone else wants without even having to think about it that much.

The problem is they don't appear to give a shit.

Having been granted the gift of automatic empathy they seem to be able to ignore what it's telling them, and even though they might be able to imagine what it would be like to find themselves on the receiving end of their behavior they prefer not to.

We've all seen them. For some reason this behaviour usually seems to manifest itself when on public transport; I suppose this is an occasion when we are all forced against our will to spend time in close proximity to complete strangers. However, whilst we're not forced to behave like complete dicks, some people do.

Years ago Ben Elton had a famous routine about everyone wanting a double-seat on the train, "You don't want some bastard sitting next to you, do you?" This is true of course. Given the choice I'm sure we'd all prefer to be left alone with our book in the mornings without some smelly stranger intruding upon our personal space. However, I can't believe the lengths to which some arseholes will go to keep their double seat to themselves, even during a crowded rush hour.

They spread themselves out, treetrunk-like legs splayed wide open. Even if you do manage to insinuate yourself into the space next to them they try and take up at least one and a half seats, refusing to fold themselves up even a bit. The won't even look at you when you ask to sit down, although an expression of utter contempt crosses their faces as you do so; how in the world could you have been so utterly selfish and annoying to have wanted to sit down? they seem to think.

What I find so hard to understand is how they can maintain this facade even in the face of a crowd of other people so obviously in need of a seat.

I think I actually met the god of this behaviour more than once; I used to see him on the upper deck of the bus on the way to work. He was unnecessarily large; not fat, just built to the wrong scale. He wore a permanent expression of sleepy arrogance on his dull features, half closed eyes peering superciliously out at the world from behind a shaggy curtain of badly cut fringe. He used to sit sideways across two seats, legs blocking the aisle and to add insult to injury used to hook one elbow over the back of the seats thus even invading the space of whoever was unfortunate enough to be sitting behind him.

When people were brave enough to ask him if they could use one of the seats he was taking up he used to regard them with an expression of dull uncomprehending hatred and more often than not didn't move an inch.

I haven't seen him for ages; in an ideal world I'd like to think that someone's bludgeoned him to death by now.