"The sight of the little madeleine had recalled nothing to my mind before I tasted it [but] as soon as I had recognized the taste of the piece of madeleine soaked in her decoction of lime-blossom which my aunt used to give me ... immediately the old grey house upon the street, where her room was, rose up like a stage set to attach itself to the little pavilion opening on to the garden which had been built out behind it for my parents."
Marcel Proust, Remembrance of Things Past 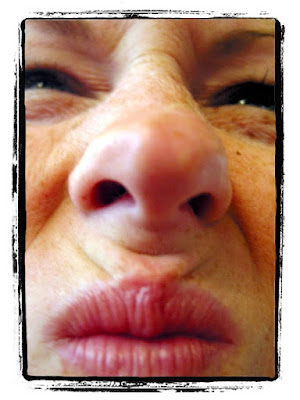 There seems to be nothing quite like smell (and its twin brother taste) for stirring up the memory in a way and to such a powerful extent that none of the remaining senses are able to.

At the moment I seem to be stopped in my tracks by this experience on an almost daily basis. I step out of the building onto the frosty campus and am instantly thrown back to any one of a number of past winters; in the playground at school, on this very same campus some twenty years previously, visiting my grandmother for Christmas on some unspecified occasion in the seventies... And it's not just the winter campus that does this; the mere smell of the outside world anywhere (but especially at night for some reason) has the power to turn back the pages of time like nothing else.

Surely it's the weakest of our senses? We're constantly being told how infinitely superior a dog's nasal faculties are, a hundred million times more powerful than our own puny noses. If this atrophied sense can evoke such a powerful remembrance in a human being, imagine what it must do for our canine brethren. It must be like living with a time machine stuck to the middle of your face.

Even in human beings this aid to remembrance can be stronger than anything short of sticking an electrode in the brain. As Monsieur Proust himself observed in the quote above there was nothing about the visual appearance of the Gallic sweetmeat that transported him back to his childhood, but the moment he put it in his mouth it was a different story. For some reason the nose has a hotline to the hippocampus denied to the swankier multimedia senses of sound and vision.

Our old friend Thugg the Caveman doesn't seem to be able to help on this occasion. In many ways he's the same as us, with massive visual cortex and a sense of self consciousness built on the enhanced audio facility of language. His experiences when tasting the mammoth bone meal biscuits dipped into sabre-tooth broth are probably just as mystifying to him.

It could be that as such an ancient sense its not linked to the young upstart language and instead can provide a short cut back to the raw experience without having to pass through the distorting filter of description. I think that it's significant that when experiencing these Proustian smell-epiphanies it's more of a sense of time and place that is evoked rather than something specific that can be pinned down.

Evoking a past experience at a mere whiff is also of course a useful survival trait. Recognising friends, family and fodder is very important, as is avoiding disease, dung and corruption. A sense of smell linked directly to past experiences is a way of making important decisions about what's in front of you very quickly. Halt! Food or faeces?

This doesn't explain why smell only seems to evoke happy nonspecific memories nowadays. Perhaps the power of olfactory recall is actually withering away in human beings, an appendix of the senses no longer relevant in the modern world, and the pleasant side of it is all that remains.

Recent research has shown that the sense of smell relies on something known as quantum tunnelling. I find it fascinating that biology found a way to make use of quantum physics millions of years ago and if you think about it, there are all sorts of thought-provoking implications.

Maybe it means the inside of your nose exists in more than one universe.
brain journal nose quantum theory smell Thugg the Caveman