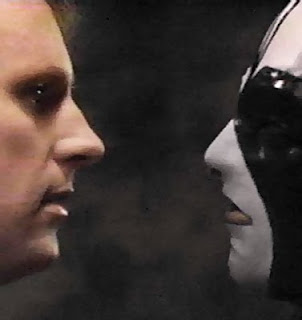 University was a very different world. People there were, well, nice. After spending six years in the Arena of Bastards that constituted Highgate School, this was a revelation. My fellow students were now more interested in my opinions, in what I had to say than they were in making my life a living hell. Also there were girls there.

It took some getting used to, but I felt I could live with it. And I no longer had to address anyone as "sir".

The only real problem seemed to be getting to watch Doctor Who. There was a TV in the common room of each hall of residence, the trouble was though that you could end up running around campus only to find all the cool kids in each one watching the same show which needless to say wasn't Doctor Who. Due to the BBC's odd scheduling, at this time the programme was nearly always on opposite some alternative indie music slot on BBC2 or the new Channel Four - which of course was difficult to get bright young students to give up watching, no matter how many other sets at the university were tuned to the same thing.

Plus I always found it a bit embarrassing to have ask to switch over to Doctor Who, even if I had been to Longleat the previous summer. Were goths supposed to enjoy Doctor Who? And some of the other people also interested in watching were a bit... weird. I remember one of them (who was, shall we say, somewhat socially awkward - and remember it's me saying this) half losing his temper and switching over anyway in a childish fit of pique, much to the chagrin of the rest of the people in the room.

Luckily we had a video recorder at home, so I knew I'd get to see the episodes eventually.

I was continuing to enjoy the Davison years. Not only was Adric now dead, but girly-swot Nyssa had been found in an uncompromising position with a giant dog and had been left behind on a colony of space lepers. What's more there was a new companion, the cowardly red-headed schoolboy Turlough who'd spent his first three stories trying to kill the Doctor. Brilliant! And of course Tegan was still there, having by now been allowed to slip into something a bit more comfortable than her air hostess uniform.

My dad was still working on the show, although no longer being at home most of the time, I wasn't getting to read any of the scripts. I was aware that Peter Davison was on the way out - which seemed terribly soon - and that my dad would be scoring the fifth Doctor's final story. It was called The Caves of Androzani.

These days fandom either considers this one of the best stories of the classic series or thinks it's overrated (probably in a attempt to appear interesting and controversial). At the time I fell into the first of those two camps, and twenty five years later am still there. The story marked the directorial debut of Graeme Harper whose work must have so impressed the young Russell T Davis that he (Harper) was called back over 20 years later to work on the revived series.

Things on board had changed rapidly. Tegan and Turlough had departed in fairly short order and the Doctor was now alone with Peri, an American botany student whom Turlough had dragged half naked into the TARDIS during the previous story Planet of Fire.

The premise for Caves was fairly simple. The Doctor and Peri land on the planet of Androzani Minor, go for a stroll and blunder into a pathetic little local war, inadvertently infecting themselves with a fatally toxic chemical in the process. They then spend four episodes trying to escape from this Arena of Bastards with limited success.

And they are all bastards, make no mistake. This is why the Doctor has no interest in helping any of them, changing the set up or saving the planet. He just wants to get himself and Peri back to the TARDIS. End of story. The only character with any redeeming features is actually the chief antagonist, S&M harlequin Sharaz Jek (Christopher Gable) who gets the hots for Peri (something which would become something of a repeated meme over the next couple of years of the show). He is also the only character aside from the Doctor and Peri with motives other than blind military obedience or capitalist greed. He just wants Morgus's head. Here. At his feet. Congealed in its own evil blood. 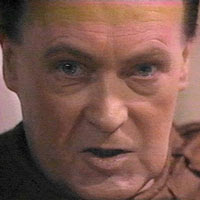 Seems fair enough to me. Morgus (John Normington) is after all, a particularly perfidious treacherous degenerate, a fescennine bag of slime with the odd habit of talking to camera and no compunctions about having the lift maintenance engineer shot just to cover up his own murder of the President. As someone once said, the needs of the many outweigh the needs of the few - couldn't the council back on Major just club together and have Morgus's head shipped to Jek by UPS, congealed or no? It would avoid a lot of unpleasantness.

Stotz (Maurice Roëves), the chief gun runner who seems to be playing one side off against the other, is particularly evil. He's basically a psychopath who's capable of gunning down his employees and then laughing about it. The scary thing about him is that you can imagine him being quite witty and charming if you met him at a party back on Major; you warm to him despite the way he nearly pushes his idiot second in command Krelper (Roy Holder) over the edge of a cliff at knifepoint and then proceeds to force-feed him a cyanide capsule.

Or maybe you warm to him because of this; Krelper really is an irritating git.

There's an obligatory monster in the story, the Magma Creature, a poorly realised reptile that really lets the side down. Without this lumbering pantomime dragon the story would be perfect. There are plenty of human monsters to go around in this one. Still, as they say, it's the little flaws that keep a guy interested.

It all ends in a bloodbath. Or should that be mudbath? Amidst explosions and fireballs, the Doctor holds off his regeneration long enough to drag the unconscious Peri from the pile of dead bodies and back to the TARDIS. He doesn't have the luxury to take time out to go swanning off through the space-time vortex to stare moodily from a distance at all the friends he's had in this incarnation (although it would be fun to see him dancing a jig on the lip of the crater Adric left when he smashed into prehistoric Earth). He's too busy administering the antidote and saving Peri's life. Only when that's done can he relax, collapsing to the floor of the console room. 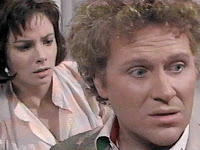 At the time I didn't want him to go - it seemed as if he'd only just arrived, but what could you do? Before my eyes he changed into someone slightly chubby with curly blond hair and far too much eye makeup. Someone who used his first few breaths to insult Peri. The new Doctor was obviously going to be very different.

You were expecting someone else?
doctor who doctor who memoir journal memoir tv university