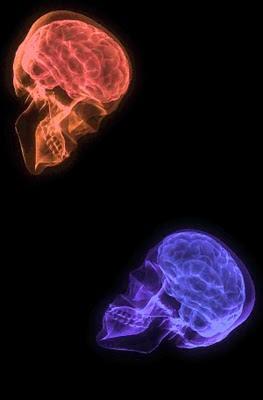 There are some things I just can't get my head around.

One of them is talking about myself in the third person. Oh sure, I can do it if I have to (although I am at a loss to think of a situation in which I might "have to") but it makes me very uncomfortable and just feels wrong. I have no idea why this might be - some error of the wiring in my brain or bad learning? It certainly doesn't seem to bother some people. If anything they seem to rather enjoy it.

I can see how it might be useful as a way of dis-identifying with the past in order to learn from ones mistakes, but I'd find it uncomfortable doing even that. As for the "Old John's really looking forward to supper" said John syndrome... I just can't fathom it .

I would be an interesting subject for study, to see what kind of people do this a lot and what proportion of the population is happy (or at least not uncomfortable) doing so. I'd hate to think it was just me.

However, there is another thing I just can't do that definitely is quite common. The put down. Specifically, saying something in order to make the other person feel bad. I don't mean witty retorts or clever banter (which, by the way, I'm not claiming to be any good at either, I just don't have an aversion to them) but things said specifically to wound. That's not to say I can't upset people, I am capable of quite monumental acts of thoughtlessness, but it's never on purpose. Sometimes I just forget to take everything in to consideration before opening my mouth.

However, some people consider things very carefully. When they finally speak, the barbed remark has obviously been launched on a carefully computed trajectory and constructed for greatest devastation upon hitting its target. I couldn't do that. For a start I'm not sure that I could think up something devastating enough, but even if I could, I just couldn't say it. I worry too much.

By the way, I wouldn't want anyone to think I'm blowing my own trumpet here, saying what a marvellous person I think I am for not being able to indulge in the put down. I'm genuinely not, and think that the reason I don't "get" this is actually a deficiency on my part. In order to perform a devastating put down, I am sure one has to have an incredible amount of empathy. One has to know almost exactly how one's target feels, their strengths, weaknesses, loves and hates in order to calculate the yield for maximum effect. The mental and psychological skills required to put someone down are incredible.

Just think what could be achieved if such empathy was used for good.

When it comes to empathy, I just have to guess and a lot of the time end up frozen into silence by a lack of decision. I compensate for my lack of natural ability in this area by using my imagination. What might someone be feeling? Of course this means that a lot of the time I end up getting the wrong end of the stick and completely misinterpret things with perplexing and sometimes upsetting results.

There's one thing I still don't get though. Why would anyone want to make another person feel bad in the first place?
brain consciousness journal people psychology

Sulci Collective said…
Professional footballers in interviews often talk about themselves in the 3rdperson. I wonder if this is because it is drummed into themby the coaching staff that they are team players and not serving their own individual egos which makes me wonder if soldiers aren't the same?

As to the other phenomenon, I couldn't possibly comment...