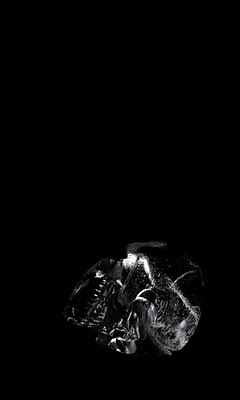 It is odd how sometimes we can get so wound up over nothing.

How often have you heard someone say that they're afraid of the dark or hate the cold? A visitor from another reality whose only experience of this one is our communication could be forgiven for thinking that these qualities, along with their cousin silence, were active, sometimes malignant, presences in our universe. Even some primitive human philosophers used to think of cold and dark as distinct properties, yins to the yangs of heat and light.

But of course they're not.

They're not anything, because they don't exist. Far from being the opposite of heat and light, they are simply their absence. If anything heat and light are the interlopers, streams of subatomic particles (or waves depending upon which side of the quantum bed you got up this morning) bombarding matter, buffeting it. This constant assault is the price we pay for being warm and for being able to see.

The natural state of the universe is pitch black and freezing, an infinite number of shapeless rocks turning over and over in the dark and cold. Forever. Here on Earth and, one assumes there on other inhabited worlds (of which I am sure there are many, planetary systems being ten a penny according to latest observations) the reality we experience of warmth, light and noise is a statistical blip.

However this means that hating the cold or being afraid of the dark doesn't make sense, not really. They don't exist. Perhaps we should learn to express ourselves differently? Positive thinking is a marvellous thing so I am told. How about I love the warmth and I am comforted by the light?

The fear of the dark is very real though. It's a fear of absence, and the real thing that we are afraid of is absence of self. Yes, I am talking about death again, cheerful soul that I am.

We, and intelligent life on other planets, are also a blip. Life, like light, is another interloper in the universe of tumbling rocks, an add-on, a plugin. However, it is a quality that has become aware of itself and is capable of feeling. What does feeling mean? Some materialists claim that it means nothing. However, even though I am nominally a materialist I can't quite believe that, although I'm not about to slip back down the slope into superstition and the belief in Weird Shit.

But perhaps it's true that death, like dark, cold and silence, doesn't really exist and is merely the absence of life. As I have discussed before, I'm not afraid of the fact that I'm not conscious right now in Australia or India, so why should I be afraid of not being conscious in 2075? It wasn't that bad back in 1955 before I was born; in theory this is the same thing. We are after all just talking about the absence of life.

However, "in theory" is all very well. The fact remains that I am still terrified.
birth consciousness death entropy journal philosophy quantum theory

Sulci Collective said…
I went to a funeral today. Friend of my parents, someone I knew well from my childhood. Their whole circle of surviving friends were there and how old and grey and wizened they looked. The cull of that generation has started...

I have a terrible fear of death - not the act of dying, but the eternal switching off of being and consciousness thereafter. Most people can keep such terrors remote from their everyday consciousness. At least once a day it comes to the forefront of mine. It permeates everything I do, especially my writing. But I don not expect it to yield me any meaningful immortality. It is just an attempt to address the cosmic joke of us having a consciousness and an awareness in the first place, seeing as we will eventually have to check it in at the cloakroom of death.
Sunday, January 17, 2010 8:09:00 pm