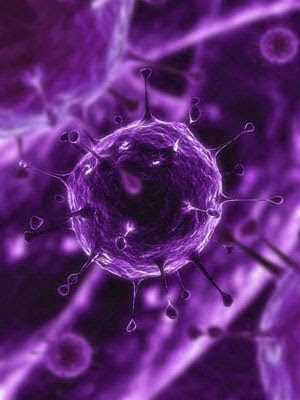 I am currently confined to my bed by a particularly annoying cold. It seems somewhat unfair that I am suffering at all; as far as flu jabs were concerned, I've had both the Swine and the Regular. Surely that should be the medical equivalent of a Get Out Of Jail Free card?

There's nothing that common about the cold. Sure, it's widespread, but there are so many different varieties that it should surely be considered as a family of diseases rather than just one. It may feel as if I've got yet another cold, but this is the first (and only) time I've ever come across this variety, hence it's virulence.

Good word that, Virulence. From the same root as Virus of course, the Latin for poison. It's quite a perfect description for them really; in many ways they are more akin to a poison than a parasitic organism. Should they even be considered alive? I've always thought not. There's certainly no method to their mechanism, they just bumble about until by pure chance they're able to infect a cell. More random chemical reaction than intent.

I now add my standard disclaimer that I am no scientist so please forgive any hideous errors from hereon in. I'm merely describing aspects of reality as they seem to me - I am very likely wrong.

Of course viruses must have arrived after cellular life had already evolved. There's no point being a lone rhinoviron if there are no noses and throats to infect. However, there's no harm either. They can just sit there, inert, outwaiting eternity. There will one day be noses.

In theory viruses are bound to happen. It's a measure of the vastness of the arena of life on Earth that such statistical flukes happen at all - a length of naked genetic material being able to take advantage of a host cell? However, once it's occurred once, evolution does all the rest.

Always thought of in a biological sense, evolution actually is a mathematical process. Survival of the Fittest or Natural Selection are just Things that Happen in complex systems. Just as it's probably inevitable that viruses will appear once there's life for them to exploit, so must it therefore probably be inevitable that life itself will arise given suitable conditions.

We've seen in recent years how common planetary systems actually are in our universe - when I was younger I remember scientists debating as to whether other planetary systems existed at all. However, now that we know they do and are common as muck, doesn't it seem likely that the universe is teeming with life?

We might wonder where the buggers are then. Statistically it's highly unlikely that we're the first so this means that either interstellar travel is impossible or sufficiently advanced civilisations lose interest in conquest and exploitation and are content merely to study. Even as we speak intellects vast and cool and unsympathetic may be regarding this Earth with academic eyes, and slowly and surely are writing their dissertations about us.
aliens chaos entropy genes journal life memes space