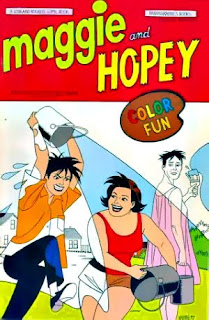 For some reason I never kept in touch with anyone from school - bunch of sadistic bastards the lot of them (and that was just the teachers... aah). An unusual side effect of this state of affairs is that the people I've known the longest aside from my family are fictional. My oldest friends don't exist. Well not in this reality.

I'm not talking about characters in books - they're frozen in aspic going through the same motions again and again every time you thumb their pages. Even characters in long running series of books can't really be counted, partly due to the nature of the medium. Any recurring characters in an author's works (such as the Vampire Lestat who somehow contrives to become even more irritating every single time Anne Rice churns one out) are going to be central to the story and therefore we're almost always privy to their thoughts. Real friends are always seen from the outside and we have to guess what they're thinking.

Characters in novels, the important ones, anyway, are therefore not really our friends. They're our alter egos. Quite often they're obviously the authors' alter egos as well. Long running series of books seem to be a particularly ripe breeding grounds for such "Mary-Sues".

But I'm not talking about characters on TV and in films either. They don't count because behind every strong character is a jobbing actor who will be unwilling to get tied down to the same role for the rest of their natural (except for Adam Woodyatt). Eventually they'll either disappear or suddenly get a new face which always ruins it. The only exception to this rule is The Doctor who neatly sidesteps the whole issue by having his change in appearance written into the story.

I think the only fictional friends you can really have live in comic books. I'm not talking about Batman, Wolverine or any of their cronies in the DC and Marvel universes who are more archetypes than anything else and just like The Simpsons never age (for heaven's sake, Bart should be at least 30 by now).

I'm not talking about Judge Dredd either - even though he has aged with the reader he's hardly the sort of person you'd want to go for a beer with. 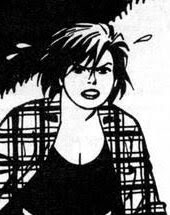 My old friends are two women who live in a Latina neighborhood in California; I've known them since we were all teenagers. Their names are Maggie Chascarillo and Hopey Glass. When I first met them they were spiky and cool, always going to see bands play and dancing around on the edge of the illegal.

Maggie was the quieter of the two who was likely to get drunk and start bending your ear about her problems. She had a tendency to overeat and despite her amazing engineering skills, always seemed to end up in dead end jobs. 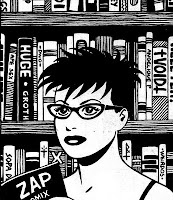 Hopey was more scary and exciting. She played bass guitar. You could be guaranteed have a great time with her but there was always the danger that if you said the wrong thing you might find yourself on the end of a torrent of verbal abuse or a fist. It always was (and still is) very hard to tell just what was going on in her head.

I know what you're thinking, but there was none of that. They were just fun to hang out with.

Not that they would have been interested in any of that anyway... it was always difficult to know what they were really thinking, but rumour had it that they were lovers (or partners, to use modern parlance) although it was years before I was able to confirm that.

They had loads of friends who used to be around some of the time, principal amongst these being Penny Century (who all the men seemed to fancy) and the druggy witchy writer Izzy Ortiz.

Over the years we've drifted out of touch and then back in again as happens with real friends. Last time I heard from them Maggie had just turned 40 and was the manager for a complex of apartments in San Fernando valley, whilst Hopey was working as a teacher's assistant. I was shocked to hear that Izzy had died in a fire. I do wish they'd start using Facebook, it would make it far easier to stay in touch.

Out in the real world of course all these characters are the creations of Jaime Hernandez and they first appeared in a comic called Love and Rockets in 1981. I got issue 1 from Forbidden Planet when there was only one of them and it was still in Denmark Street. It was in the bargain bin at the back and cost 50p.

I've been buying it in its various incarnations ever since. Reading back issues (or more recently collections) feels more like reminiscing than revisiting these times, all adding to the sensation that Maggie and Hopey are particularly real fictional characters. Old friends. Despite the fact that their world does differ from this one in that it seems to contain a number of science fictional elements (that's where the Rockets of the title comes in) even if they're not always apparent. When I first met Maggie in the eighties she used to ride a hover bike to work and spent some of her time fixing spacecraft and robots.

I do hope I hear from them again soon and that they remain in my life for the foreseeable future. I quite like the idea of me as an old man reading a comic featuring the adventures of two old women.

You can catch up with 30 years of the lives of Maggie and Hopey
yourself in the enormous collections Locas and Locas II.
comics fiction friends hopey glass jaime hernandez journal love and rockets maggie chascarillo writing