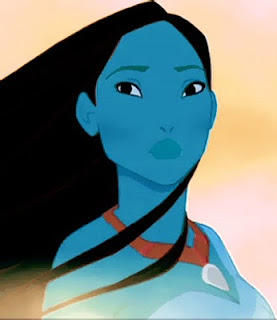 I don't go to the cinema as often as I'd like, but did manage to go and see Avatar 3D on New Year's Eve. This was only the second of the new wave of 3D films I'd seen, and the first one that was "live action" (in the loosest sense of the term as I'm assuming those big blue guys weren't real).

3D on this scale is certainly a spectacle. The first ten minutes or so I was constantly ducking the things flying out of the screen at me and marveling at the display, but after a while I settled down and got used to it - if anything it seemed to me that this is how all films should always have been, the screen a giant window into another world at the front of the hall. Although it may be true that 3D wouldn't be particularly essential to the plot of a romcom.

However when it comes down to it once the 3D, the comprehensive world building and the fantastic special effects are stripped away, the plot of Avatar itself is fairly basic (spoiler alert I guess). As one clever internet pundit revealed, it's basically blue Pocahontas in space.

One thing that particularly bugged me about the writing was how utterly irredeemably bad and one-dimensional the villains were. Sure, there were people and companies like that in our time, but is the human race really going to carry on behaving in that manner even into the mid twenty-second century?

Perhaps I'm being really naive, but I've heard rumblings in the scientific community advising that if we even discover as much as one living microbe on Mars we should give up our plans to go there and allow Life on Mars to develop naturally (or not). Despite climate change deniers - twats who think that just because we've had a little bit of snow, global warming doesn't exist - I think most of us are far more ecologically aware these days and get bothered about leaving the TV on standby, let alone wiping out an entire alien culture just to get our mitts on some magical Unobtainium.

So I'd hope that if we survive to the year 2154 it will be because this sort of behaviour has died out. I'd hope.

What exactly did they want the Unobtainium for anyway? I don't think it was ever adequately explained unless I was being distracted by some 3D at that point. Something to do with energy, wasn't it?

Still, if the humans in the film really were that evil, I'd be worried for the Na'vi. Sure, the natives may have kicked some human butt on the ground, but you can bet that the first thing those ex-marines would think of once back in their ships would be to take off and nuke the entire site from orbit. It's the only way to be sure.

Of course it's unsurprising given that James Cameron wrote and directed it that it feels as if it's taking place in the same universe as Aliens. Sigourney Weaver could well be playing Ripley's aunt or cousin (as well as reprising her role as Dian Fossey from Gorillas in the Mist) and I wouldn't be surprised if the Resources Development Administration was actually called Weyland-Yutani and was hiring in ex-Colonial Marines as its soldiers.

But whilst I'm indulging in crossover speculation and given the subject of some of my recent blog posts, I can't help but think that The Doctor would have been able to come up with a solution involving a lot less bloodshed.
avatar film journal review SF