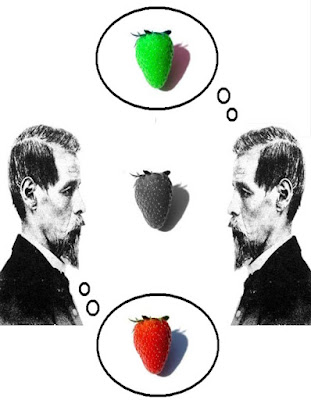 There is an old philosophical chestnut about seeing the colour red. How do we know that what I see as red is what you see as red? We may both call it red, and may be referring to the colour of tomatoes, blood and pillar boxes, but how do I know that what you call red isn't what I call green?

This is a simplified version of John Locke's Inverted Spectrum (I'm talking about the philosopher rather than the erstwhile passenger of Oceanic 815), a thought experiment in which we wake up one morning and find that all the colours in our sensorium have inexplicably reversed. Aside from providing the inspiration for a potentially interesting blues number ("Woke up this mornin'... Everythin' red had gone green / Yeah I woke up this mornin'... Everythin' green had gone red / Had green strawberry jam on toast for breakfast... Think someone's messing with my head...") there's no real reason why this should occur other than to introduce the reader to the idea of qualia.

Qualia (singular "quale") are supposedly the actual thingness of sensations in our experience, the actual painfulness of pain, the redness of red and the sweetness of sugar. These are things that are, basically, impossible to describe if we have to do so without reference to anything else. For example it's impossible to describe red without mentioning other things that are red.

Given that they're impossible to describe and impossible to detect but are nevertheless apparently real, some philosophers have chosen to use them as a final clinching proof that materialism is wrong, that there exists something other than just the body.

I'm not sure that they prove anything of the sort. Our personal definition of "red" (and how redness is therefore represented in our conscious minds) is bound up with our internal models of things that are red and the emotions we associate with them.

If the representation of red in the cortex can be associated with something measurable, an electrical charge in the nervous system, and this cortical charge can be shown to be stimulated by light of a certain wavelength then these are things that are knowable and can be said to be the same in two different people. But these are not qualia, the qualia fans claim.

However, as far as I am concerned, all that redness is can be defined as these measurable qualities in tandem with the mental associations we have. If we can't describe redness without recourse to something else, then it doesn't exist on its own. There are no qualia.

Imagine yourself waking up in the middle of Locke's thought experiment. Once you'd finished singing the blues, you might be moved to investigate your circumstances. You stare at the pillar box on the pavement outside your house. It looks different. It now looks like what only yesterday you referred to as green. You can dismiss the hypothesis that this is due to the nocturnal antics of a maniac with a pot of emulsion because all the buses driving past seem to have been affected in the same way, the contents of your bottle of Heinz Tomato Ketchup has gone green, and when you cut yourself shaving, green blood came out. You're living in a New Order song.

Nothing is measurably different though. You analyse the tiny electrical currents flowing through your brain, you make measurements of the wavelength of light bouncing off a ripe tomato. All measurements correspond with what should be red. The only thing that has changed is the actual thingness of the feeling, to coin a phrase. The quale.

Or has it? The only way you can tell anything is different is by comparing your current experience with memories of previous ones. However if someone's messing with your head it's just as likely or possible (in the imaginary worlds of thought experiment anyway) that it's your memory retrieval system that has been inverted rather than your sensorium. The effect on actual experience would be exactly the same...

Personally I think it's nonsensical to talk about redness in this way. I believe we all experience it in broadly the same way - it's represented in our brains as "the colour of tomatoes and blood with the following connotations..." As long as whatever is describable about it is the same, then it is the same. We are what we speak, and so is our experience of the world around us.

On the other hand I'm not sure we all experience emotions the same way, but that's a subject for another day.
brain consciousness data ideas journal memory philosophy qualia