"It's certainly a phenomenon in all walks of life.

"Well, at one time, you've got it, and then you lose it, and it's gone forever. All walks of life: George Best, for example. Had it, lost it. Or David Bowie, or Lou Reed."

"Lou Reed, some of his solo stuff's not bad."

"No, it's not bad, but it's not great either. And in your heart you kind of know that although it sounds all right, it's actually just shite." 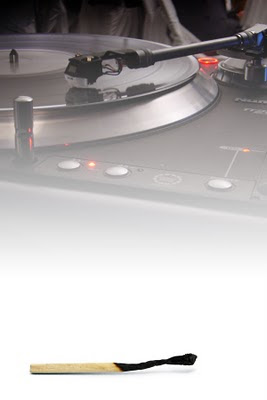 Odd that people tend to sneer at the new and different. It's been my observation that the creative mind can be at its most interesting when first it releases its brainchild upon the scene. Perhaps people have an inbuilt conditioning to be wary of the brand new? In Thugg's World, for instance, what's brand new might conceivably kill you.

People also dismiss the new and the popular because of the hype. In an attempt to appear more sophisticated than what they imagine to be the lumpenproletariat, some people affect a disdain for anything that's all the rage and only after it's been going for quite a while will they grudgingly admit that in fact it's quite good.

This is a shame, because a lot of the time by this point it's not as good any more.

This can happen in any creative field, but is particularly noticeable in the music business. The first hit (and associated album) bursts upon an unsuspecting nation and people can't get enough of the new star in the ascendant. However, despite the difficult but critically acclaimed second album, after that releases seem to be subject to a law of diminishing returns. The third album is OK I suppose. The fourth album is a return to form! I didn't really like the fifth album....

There are many reasons this could be. Some people probably only have one great work in them, one Magnificent Octopus. But the nature of the music industry in the west is precisely that. An industry.

A lot of the time the Money Men of Gigagram Records have already invested a lot of time and money in the New Artist and so are determined to flog the latter to within an inch of their creative life to extract every possible last drop of profit, even though the latter may only have had six months to give.

Sometimes the New Artist is more prolific and has years of creation left in them. Unfortunately in many of these cases the Money Men fixate on something inappropriate as the reason for the success and force the New Artist down inappropriate aesthetic avenues resulting in a series of glossy well presented turds.

And sometime it's just because it's taken them a while. By the time their have their Hit Album they've already got five Obscure Albums under their belt and have run out of material.

There is always reinvention. Some stars manage this on a regular basis, and superficially, it seems to work. Unexpectedly swapping genres and shining in a new arena is a particularly clever trick and can extend the shelf life for years. But after a while even this seems to pall. Taking a step back and looking at the big picture of the career curve it becomes obvious that each successive reinvention was marginally less successful than the last. Eventually the reinventions will start to become a bit of a joke. Oh no, please, don't...

Some artists should - and more importantly should be allowed to - just stop. Hopefully before people become bored with them. They can then go away and write a book which will do incredibly well because everyone has such fond memories of how brilliant they were and how they quit whilst they were ahead.

Of course none of this applies to our own personal favourite bands. How can you say that? That seventeen album with the ambient trip-hop spoken word section was genius...
journal music psychology Thugg the Caveman writing

Louise Halvardsson said…
I get annoyed if a band releases more than 5 albums. Same with writers. 5 books is enough in a life time. Better to create 5 good ones than 15 average ones. Besides I can't keep up with people who produce too much, I get bored with them and want to discover something new!
Thursday, February 04, 2010 10:29:00 am