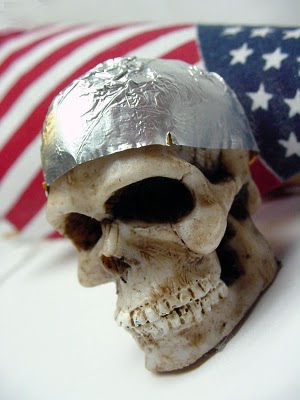 We probably all know somebody who revels in conspiracy theories. Someone who isn't happy unless they're deconstructing a largely well documented and relatively recent historical event and blaming it all on Them.

The identity of Them does vary, but most of the time it is drawn to the strange attractor of the US Government or perhaps a shadowy cabal of super-rich multinational-owning American neo-cons. For some reason They have a lot of time on their hands and spend most of it trying to confuse the issue on a global scale. But despite their near limitless resources and frightening ruthlessness, they always seem to get caught out by a weirdo living in his mum's basement (let's face it, they're usually male). A weirdo who, despite the fact that he nearly has a panic attack when he tries to talk to the girl who works in the corner shop, seems to be capable of toppling governments.

In his head at least.

Why do I think these conspiracies are unlikely? If Basement Weirdo is right, perhaps I'm just being closed-minded and accepting the line fed to me by Them...

I'm not though. If They actually exist then about the only thing I think They are capable of doing is feeding me a line. A government or any similar organisation, shadowy or not, is just a bureaucracy, and anyone who's worked in a bureaucracy will know that they're 99% incompetent. I just don't think that US Government would have the co-ordination or cojones to have secretly masterminded 9/11. Bear in mind that this was a Government with a President who less than two years earlier, when asked who the Pakistani leader was, gave the answer:

"General. I can name the general. General."

In many ways governments are just like spammers. They can spread misinformation and lies because that costs nothing, but are incapable of doing anything that requires an effort. Belief in conspiracy theories of this kind is the equivalent of believing that online pharmacies are putting something in the water to cause impotence in order to sell more viagra.

So why are these crackpot theories so attractive to some people? I think it's because a belief in Them is a more attractive prospect than attempting to understand, say, the motivation of Al-Qaeda. The shadowy cabal of men in suits meeting in a darkened boardroom and sending their minions to bump off an investigative journalist in an underground car park is familiar from countless TV shows and movies, in some ways it's a far more comforting idea than the thought that someone somewhere in the Middle East wants to kill you because you don't believe in their god.

And like any addiction, once you've started, it's very difficult to stop. Far easier to believe that They faked the Moon landings than to get your head round the incredible technological achievement of the Apollo program.

And then it starts getting silly and you end up with the idea that Morrissey somehow knew that Princess Diana was going to die years in advance of the event.

In my opinion there are far more interesting things to think about.
conspiracy ideas journal politics

Sulci Collective said…
I think the clouded story of how JFK came to be assassinated gave a real impetus to the conspiracy theorists. Plus the strange niche in American identity that allows for the individual to berate the fact that there are collective bodies such as NATO and the Federal Government whom they perceive as directly impinging on their freedoms. The British who so readily delegate to our political leaders in order to have it large 24-7, periodically raise our heads to tut at the corruption that ensues, but we don't believe there to be any conspiracies underlying anything.

But where I disagree with you is I feel a burning compunction to query the surface appearance of all things. I want to trace the underlying connections between things and especially with regard to language - I'm not interested in PC language, but in inbuilt bias and status relations behind all words. It's not a conspiracy but a build up through history. Can't remember my Marx, but his critique on Adam Smith's description of the free market functioning 'as if by the operation of an invisible hand' - the hand is not neutral. It is established through class, education, resources and social power. That is not to say it is a conspiracy or that any cabal can control it, but it is not RANDOM & accidental. Thereby lies my interest, in stripping the scales from our eyes, even if there is no one behind it to put in the dock.

Richard Tammar said…
Which shadowy government agency paid you to write this article? That's what I want to know.
Wednesday, February 10, 2010 5:03:00 pm

Catmachine said…
Just to clarify - I'm not saying I believe everything I'm told or accept things as they appear to be... I am sure that TPTB are more than capable of bombarding the people with political spam in order to keep people scared and to stay in control.

It's just that with my rationalist head on I always remind myself of Occam's Razor.

I don't know enough about the Grand-daddy of all Conspiracy Theories, JFK and the Grassy Knoll, to express a firm opinion on that one way or another, but am sure that, as you (Marc) say it launched the phenomenon. If anything I'm interested in the phenomenon itself, and what leads people to (want to?) believe these things.
Wednesday, February 10, 2010 6:19:00 pm

Sulci Collective said…
Similar lack of nourishment that drives people to join cults or become born-again zealots of any religious persuasion. They don't have the inner resources to figure things out for themselves and cling on to externally provided info-meshes that seem to provide all the answers, while making them feel empowered that they came up with the solutions for themselves.

Anonymous said…
Excellent piece. Our wonderful minds are always seeking patterns and looking for answers to difficult questions, so this is part of the human condition, for better or worse.

We all have small prejudices and biases, conspiracy theorists seem to magnify theirs.

Often at their core, they'll blame certain races, groups, or govts for all the world's ills.

Also fueling the fire is that, occasionally, conspiracies do occur, although mostly small-scale and often found out quickly.
Monday, April 30, 2012 2:57:00 am