Dimensionally Transcendental Confession 9: The Death of Doctor Who 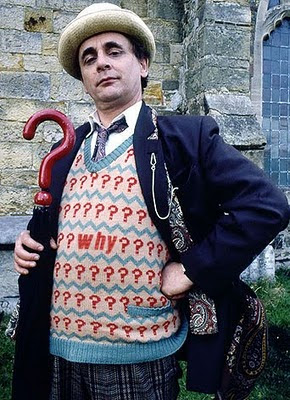 So, no more Doctor Who, at least for the time being. What was I going to do?

To be honest, it couldn't have come at a better time for me. I was about to finish my second year at university and so would probably benefit from being able to concentrate on my coursework in the third year without obsessing about some old TV show.

However, instead of knuckling down to my studies I started obsessing about sex and drugs and rock'n'roll instead. On the final day of my second year I lost my virginity; thinking about it in the context of this memoir I wonder if the universe was trying to tell me something? Was I being advised to put aside childish things in exchange for this new world of sensual experience?

Probably not. Like all human beings I am seeing patterns in things that aren't there. For good or for bad I spent the hiatus year enjoying myself, and thanks to a conveniently timed bout of glandular fever, didn't even have to sit my final examinations. I entered the second half of 1986 full of optimism about what my life could be.

The first couple of minutes of the new Doctor Who filled me with optimism as well. Yes, in September 1986 it was back. Setting aside the whiny new arrangement of the theme music, the future looked very bright indeed.

The camera swooped dramatically across the hull of an impressive looking space station which flung out some kind of tractor beam, pulling the TARDIS in. It looked expensive. It looked cinematic. The concept of a fourteen part story, the longest in the programme's history, was exciting. 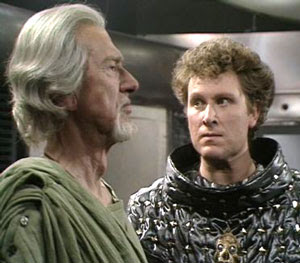 what if Colin Baker had stayed?
Unfortunately, Trial of a Time Lord, whilst it had its moments, was ultimately very disappointing, and it would be all downhill from here. In retrospect Revelation of the Daleks turned out to have been the last gasp of greatness in the classic series, and even though Colin Baker had now settled comfortably into the role, the Trial was not his finest hour. They added insult to injury by kicking him out without so much as a proper regeneration scene; his last televised words being "Carrot juice, carrot juice, carrot juice."

Not even in the same league as "It's the end - but the moment has been prepared for."

I have no idea what the production team were thinking over the next three years. I realise that it's all a matter of taste, but to me it felt as if they were going out of their way to make the show look like shit.

Firstly they hired Sylvester McCoy as the Seventh Doctor. I realise that he's full of enthusiasm for the programme to this day, is an excellent ambassador for the show and probably a lovely guy, but his Seventh Doctor was awful, and was the main reason that I started drifting away.

The whole tone of the production was wrong. They lit it like a game show and gave it a new computer generated title sequence to match. There may have been some poor casting decisions made in the current incarnation of the programme, but back then it was every bloody week. Bonnie Langford. Richard Briers (his casting worked a couple of years ago in Torchwood, but back in 1987 he was still just one step away from smug, self-centred git Tom Good) . Ken Dodd. Hale and Pace. Nicholas Bloody Parsons. 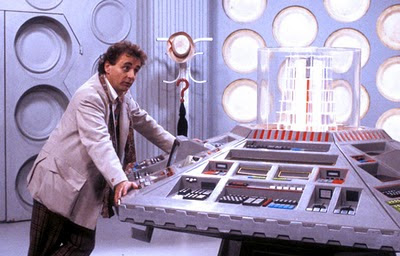 I'm sorry. I know there are some people for whom 1987-89 are their Golden Years of the programme, some people for whom Sylvester McCoy is "their Doctor". I just can't work out why. I can only assume that Seventh Doctor stories are an acquired taste like that cheese with the maggots in it. Even to this day I find these episodes embarrassing to watch. So I stopped.

I reached a point that given the quality of what was being served up, I had better things to do on a Saturday evening than watch Doctor Who. This means that I missed most of the later McCoys on transmission, you know, the ones everyone thinks are great. The ones that became known as the Cartmel Masterplan.

Reading about it now and watching the episodes in subsequent years I can only be grateful that the series was cancelled (admittedly the only time I watched Ghost Light was when I was very, very drunk). All this business about "...more than just a Time Lord..." and obscure references to The Other smell to me like the worse excesses of fanwank. I'm not surprised that the BBC pulled the plug when they did.

I don't even remember hearing about Doctor Who's cancellation. It just seemed to slip quietly away during the inter-season night, and when I did hear, it was a case of "Oh, that's a shame," as if I'd heard that an elderly uncle had passed on; someone who used to entertain me during my childhood and whose visits I had always looked forward to but who had in latter years had begun pissing the bed and shouting abuse at his carers. I felt it was for the best.

I had no idea that the Doctor would be back, but shouldn't really have been surprised, give his talent for regeneration.

He who controls the present controls the past. Are the powers that be still editing history? For how long will they be able to continue to do so?