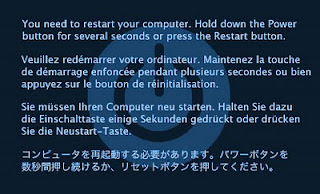 Tomorrow morning is when I go into hospital to have a general anaesthetic for the very first time.

It's an interesting concept. Looking at the operation of the brain as analogous to that of a computer it's more like a hard reboot, actually being switched off and on again as opposed to mere sleep which is more comparable to being in stand-by or, well, sleep mode.

Will I feel any different afterwards? I'm hoping that such a restart will clear out any unwanted program loops, neuroses that have been running unchecked ever since a random combination of circumstances and input set them off. Mentally I should feel better, that is once I've stopped feeling nausea.

And, most interestingly, what will happen to my consciousness? I have heard that by all accounts it's as if no time has passed; as the inhabitants of the Dollhouse say "Did I fall asleep?"

This makes sense from a materialistic point of view. No new data is entered or data sorting takes place between going under and coming round, so it's unsurprising that the stream of consciousness carries on from the same point.

Or so the theory says. I will be reporting back here in as much detail as I can remember.

Rather disturbed to read in the booklet "You and your anaesthetic" that I was given that a possible side effect is "death". By definition, how can death be a side effect?

Have You Tried Turning It Off And On Again? 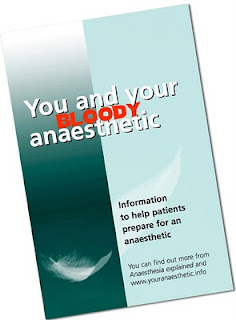 Luckily, death wasn't a side-effect, or at least not in this quantum reality. Once at the hospital, everything seemed to go quite smoothly, I got to the alarmingly named "Ansty Ward" (think anagram) before anyone else and was told I'd be done first in about an hour's time.

Other patients started to arrive. All older men. Was I in the old men ward? Come to think of it, did this mean that I was I now an old man? The nurse asked them all the standard series of questions; amusing when one of the other patients answered the question "Are you on any medication?" with "Yeah, tablets and that."

Still felt nervous so decided to change into hospital gown and get into bed; to switch roles and officially become a patient. That made me feel better; there's something about it that alters the mind set and makes you think "Well I must be safe with them because they know what they're doing. They're doctors." It probably helps if you don't watch Casualty or Holby City.

In confusion I put the gown on backwards, in other words with the opening at the front. Made more sense to me. I was lying on my back and they were going to operate on the front of my body after all.

It all got slightly alarming again when they came for me and started wheeling me through the corridors. There was also a comic element to it; probably because I'd seen it in so many TV shows and movies but never actually experienced it until now.

I arrived in some kind of holding area with other patients being wheeled in and out and was parked next to a very old lady before being interviewed by the anaesthetist's assistant a cheerful, sarcastic woman. A studied, practiced cheeriness and sarcasm, I am sure, but probably just the right bedside manner for me at that point. She asked a few questions, was disparaging about the blankets and went through my paperwork before wheeling me through into the anaesthetic room where I was prepped. Blood pressure, - check. Heart rate - check. ECG hookup - check. Inertial dampers - check.

The anaesthetist arrived, a cheerful (but not sarcastic) Egyptian man. Cannula - check (ouch) after a bit of trouble with a wobbly vein.

Now came the moment of truth. First of all something was introduced into the vein through the cannula to relax me. I felt the coldness as it went in but didn't notice anything else, although perhaps I would have panicked more when the actual anaesthetic was introduced?

A deeper coldness slid into my vein and up my arm. Concentrate, I thought, whats going on with my awareness? It felt like a mist rising from the bed and infusing my body. A mist that tasted like - no, more looked like - no, more smelt like - no more reminded me of something from my childhood. What was it? On the tip of my mind, something I was playing with, a feeling, a state of mind, something when I was around five or six. A feeling a colour, a smell? What?

***
I woke up. It felt like normal waking up. To clarify - it felt like waking up fairly quickly and naturally after a good night's sleep as opposed to the unsatisfying couple of hours' fractal semi-consciousness that normally passes for waking up in my life these days. It was refreshing.

I had an oxygen mask on, and a woman was watching me. The room was a mirror image of the holding area I'd been in before the operation and was calm and quiet. The sun appeared to be shining outside. I had a headache and a sore throat.

Yes, the last thing I remembered was the rising mist and frustratingly unreachable childhood remembrance, but it didn't feel as if I'd switched straight from then to now. I'd definitely been unconscious. The only difference I could ascertain is that normally one doesn't remember falling unconscious so clearly.

The relief that all was well was so great that I almost felt like a child in a funfair - I wanna go on it again! Eventually I was wheeled back to the ward, where I spent most of the rest of the day recovering.

So, do I feel any different? Did the downtime give me a mental enema? It's difficult to tell. I feel more cheerful and as yet have been unable to locate any of the customary depression that dogs me so much of the time. I feel more positive and mentally energetic (even if bodily I'm still tired). We'll see.

If only I could shake this bloody headache (still with me 24 hours later). Still as side effects go it could be worse as I can always pop down the street to the chemist to get something for it. Bit more difficult to do had I ended up with the side effect of death.

Who's read The God Delusion? More or less insulting to religion than The Satanic Verses?