April 25, 2010
I have come in search of evil. This place looks the part. No-one notices me step from the crowd and mingle with the journalists and photographers outside the courthouse, their anticipation my aperitif for the feast to come. They're waiting for the appearance of a monster and so am I.

We malevores have probably existed since the first time a human being picked up a weapon to use against his own kind. For millennia we gorged, harvesting the baleful mental produce that was abundant wherever mankind went about his business. On the battlefield, in the torture chamber and pouring from the mouths of priests and prophets like manna from hell. 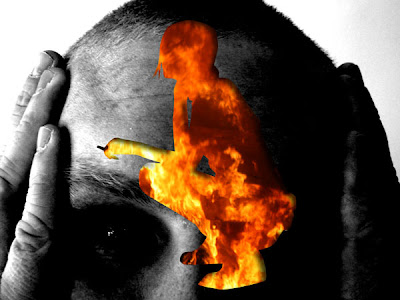 Things have changed in recent years. There's a famine on. It's not enough for us that people think bad thoughts - they have to express them and act on them. These days they're loath to do so for fear of what others might think.

In these desperate times we have had to take up emotional husbandry. Given enough encouragement and a nudge in the right direction, there is plenty of room in this society for evil.

Inside the courthouse is a man the papers had already described as "Evil Incarnate" even before his trial had begun. Now that he's been found guilty of multiple infanticide they're going to have to come up with some new superlatives.

The doors open and here he comes, sandwiched between two null-faced officers. Around me the flashbulbs begin detonating; ignoring them I look straight into his eyes. The desperation and neediness is still there. It's what drew me to him in the first place. I spent months whispering in his ear, encouraging and nurturing those unhealthy urges until he had no choice but to act.

There is confusion and insanity in his expression as well, but it's far too late for him now. I've irrevocably twisted his thought patterns into something to suit my purpose, something that will provide me with the nourishment I need.

I turn to the crowd. Over fifty faces contorted in fury. A wave of hatred flows past me in step with the cacophony of wrath pouring from their mouths. Not one of them, not a single person, is thinking about the victims, of the terror they must have endured before death, how much worse going through such an ordeal must be when you're still at an age when you believe in monsters.

The only thing the crowd care about is that they've been given a target they're allowed to hate. Given the opportunity they'd tear him to pieces with their bare hands, not out of any sense of moral outrage but simply because they feel that it would be permitted, that they could get away with it.

This 500 word story was my entry for The Campaign for Real Fear. Whilst it didn't make the final selection, I didn't want to let it go to waste, so have posted it here as a piece of (very) short fiction.