Previously on DTC...
At a time when, aside from the 1996 McGann TV movie, there had been no new Doctor Who for over ten years, I suddenly came across a double cassette in Borders - not an audio book, but a proper brand new, full-cast, audio-effects, four episodes, theme music and everything story starring the fifth Doctor and Nyssa.

Well of course I bought it. It wasn't half bad either; neither Peter Davison's nor Sarah Sutton's voices seemed to have changed that much (unlike Steven Pacey who, in the brief audio Blake's Seven comeback of The Sevenfold Crown and The Syndleton Experiment seemed to have turned Tarrant into an unrecognisable gruff voiced old toff) and it being audio they were free to do stuff they'd never have attempted on TV.
They were being produced by a company called Big Finish who seemed to have achieved the impossible by being granted a licence to produce official Doctor Who by the BBC (I was aware of previous unlicenced productions which had always smacked of fanwank - the "official" tag here made a BIG difference).
What was also clear was that this seemed to have been going on for a wee while but had failed to register on my personal radar. I'd lost touch with The World Of Who; whilst the novel range had continued under the BBC banner there now seemed to be so many of them that I wouldn't have known where to start. Once more I'd grumpily told myself that they weren't real Doctor Who, that they were just more fanwank.
This attitude wouldn't wash with the audios. They featured the original actors (including TV Doctors Five to Seven - and in an even more impressive coup, Eight, of which more anon) which made a huge difference. I'd have to collect them all no matter how long it took. Perhaps this was the future of the Doctor - released on Shiny Disc with the listeners' imagination in charge of the special effects (so I'd only have myself to blame if they looked a bit ropey).
It was a daunting task - they'd been going a couple of years and even discounting the various spinoffs it was still a bit of an investment. But it was worth it for stories like the magnificent Spare Parts which told the origin of the real Cybermen (as opposed to the ones that Trigger from Only Fools and Horses built in an alternative universe), Rob Shearman's Jubilee (which was the inspiration for his later episode for the TV series, Dalek) or The Rapture by Joseph Lidster (who went on to write for Torchwood on TV) in which the Seventh Doctor and Ace end up at a rave in Ibiza...

Once I'd caught up on the back catalogue, I subscribed, and have been doing so ever since. It was good to hear the Doctors back in action, especially Colin Baker who'd been somewhat short-changed by his time on TV. The audios gave him the opportunity to prove how good he could have been given the chance.

Then of course there was the "current" Doctor as played by Paul McGann. Denied a regular TV series, he'd been tempted back to audio and his new adventures alongside companion Charley Pollard (played by India "Masterchef" Fisher) were being released in seasons, taking the Doctor ever forward into new and unexpected territories - unlike his previous incarnations, the Eighth Doctor's new audio adventures didn't have to be squeezed into existing continuities. 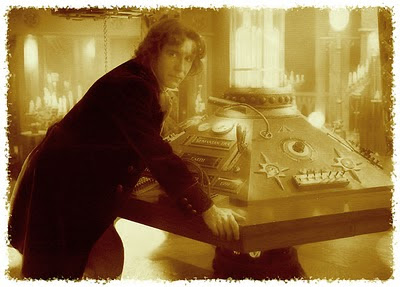 The stories took some risks - having the companion tell the Doctor she loves him felt very radical at the time (remember this was before the RTD era). They told some complex and thought provoking stories - amongst them the minimalist Scherzo and multi-layered The Natural History of Fear.

Of course there were some mis-steps - you can't please all of the people all of the time and producing a brand new Doctor Who adventure every month year in year out was bound to result in output of varying quality. Nevertheless, this kept the candle burning and reignited my own love for and obsession with the show, providing me with a lot of solace during the early 2000s (another period of personal mental negativity) much as the Peter Davison era had got me through the unspeakable nightmare of school.

The audio era of the programme came to mean so much to me at the time that when I first heard the news that the Doctor was returning to his original home on TV, amongst my initial reactions was the thought "Oh no! Does this mean there won't be any more Big Finish CDs?"

What would it be like?
audio Big Finish doctor who doctor who memoir fiction journal memoir

stuart said…
It was so strange, hearing it was coming back. A few snippets in papers here and there, the news that Christopher Ecclestone was going to play the Doctor... etc. Then that utterly bizarre moment when the BBC announcer said (or something along the lines of) 'and now, Doctor Who'... Utterly, utterly bizarre.
Monday, May 17, 2010 2:15:00 pm