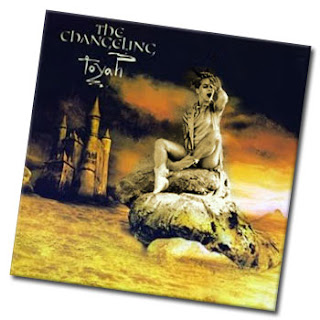 There was nothing for it really. In the end I had to admit to my immediate family that I had become a Toyah fan. I imagine it was almost like coming out - in some ways it was coming out. In admitting I liked Toyah I was admitting I liked girls and therefore wasn't the asexual child I had hitherto appeared to be.

Still, without doing that it would have been difficult to get to the gigs, and attending gigs was the natural next step.

The places in which I first saw Toyah play weren't exactly the ideal introduction to me of the world of gigging.  Hammersmith Odeon and Theatre Royal Drury Lane - great hulking cavernous buildings with nary a chance of an intimate show. At the time I didn't know any better though and any gripes I might have had at the choice of venue were totally eclipsed by one simple fact - for ninety minutes or so I was going to be in the same room as her.

As well as 3000 other teenage boys. Not to mention the little girls and their parents. And the teenage girls.  And the posse of die-hard punks.  And the band. And the road crew. And - at the Hammersmith Odeon - a whole tribe of bouncers who were determined to ensure that no-one left their seat.  But even the bouncers couldn't spoil the excitement and enjoyment of Toyah live. There she was, just over there and these were the songs; bigger, louder and faster than I'd ever heard them before. Some of them brought tears to my eyes, goosebumps to the back of my neck and a huge flood of endorphins into my bloodstream.

Inspired by these experiences, I wrote more letters to Toyah on my prehistoric typewriter; she even wrote back again, proving that the first time had been no fluke.  I joined the intriguingly named "Intergalactic Ranch-House" which was her fan club - a friendly, rough and ready organisation with photocopied newsletters sent out six times a year along with black and white Walkerprints of Toyah and of course a membership badge.  The badge joined others I'd been able to acquire from the vendors on Oxford Street on the reverse of the lapel of my school blazer. This was partly to avoid being told to remove them by the teachers but mostly as a secret act of defiance against the Fuckers. I was sure none of them had received letters from her.  Writing to her wouldn't have occurred to them.

She continued to appear everywhere; it felt almost impossible to keep up with her appearances on TV and in magazines.  There may have been only three TV channels, but there was a plethora of glossy magazines aimed at the teenage consumers of the flourishing New Romantic pop scene; go into in any newsagent in the land and you came face to face with a whole shelf of Phil Oakey, Marc Almond, Adam Ant and Toyah staring at you with heavily made up eyes. Pop Hits, Disco 45 Songbook, Chart Hits, Smash Hits, New Sounds New Styles, Flexipop, the variations were endless.

However, now that she was a success, the serious music press had started to get bored with Toyah. I found myself very upset by some of the vitriol now appearing in the pages of the NME, Record Mirror, Sounds and Melody Maker.  I thought her 1982 album The Changeling

was brilliant, no matter what some cynical coked-up journo might think. 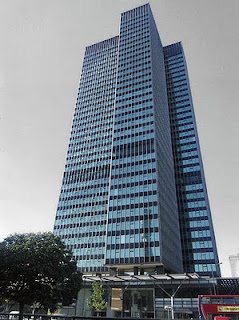 I soon got the chance to tell her this in person.

It was a dull grey day in late June 1982. A weekday, so I'd been at school earlier on. However, I was now in my bedroom listening to Capital Radio. I don't remember what the show was now, but it was some undemanding discussion programme.  Today the panel consisted of a load of men... and Toyah.

I knew where Capital Radio was - that huge blocky tower opposite Warren Street tube that dominated the London skyline and seemed to be challenging the skinny Post Office Tower to a fight. What's more it was only a few stops away on the tube.

Half an hour later I was standing outside the revolving doors on a deserted Euston Road listening on my green transistor radio as the men on the show clumsily flirted with Toyah. My heart was beating fast. She was in there and would be coming out through here.

"All right mate? Are you waiting for Toyah?"

I looked up. A bespectacled young man in an anorak brandishing a camera had joined me. He looked more like one of my erstwhile fellow nerds from the aisles of Forbidden Planet than a Toyah fan, but I said hello anyway, and we conducted an awkward conversation.  He was called Grant.  He said he'd take a picture of me with her and post it to me.

I couldn't really concentrate of what he was saying. The radio show had ended and she'd be coming out any minute. Down those stairs at the back of the foyer past the huge painting of her by Dexter Brown.

There she was - I could see the bright pink mop of her hair as she descended the stairs.

"OK, here I am!" She was outside and standing right in front of me. 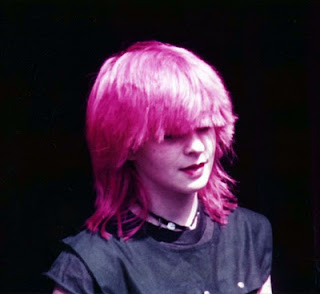 She was small. I'd seen her live and on TV, but hadn't quite been prepared for how diminutive she actually was. Her hair was bright. She seemed far more there than anyone I'd ever met before, her personality burning through the skin of reality. Or was that just in my head, my expectations of her being reflected back at me?

Grant was talking to her, taking record sleeves out of his rucksack. It hadn't occurred to me to bring anything along to be signed.  A blonde man who was obviously Toyah's boyfriend / bodyguard Tom about whom I'd read stood at a slight distance to one side.

She asked if we liked the new album.

"It's brilliant!" I blurted. She look at me, surprised and pleased. I wondered why my opinion mattered.

"I'm so glad!" she said, "I worked my bollocks off on that album and the press have just been slagging it off!" I started to talk to her about some of the songs, in particular the stand-out Angel and Me which was a bit of a departure from her usual style, but amazing nonetheless. Grant meanwhile was lining up the shot of me and her.

"Cheese," she snapped, almost as if she was annoyed at the interruption too, I imagined.

Grant took his place next to her whilst I fiddled with the camera.  Rather than talking to her, he put his arm round her shoulders. "You don't mind, do you?" he asked Tom. I wondered why he hadn't asked Toyah if she minded.

"Yes," growled Tom. I took the picture and Grant let go of her.  Toyah said goodbye.  She and Tom got into into a small white Volkswagen Polo parked at the kerb and drove off. I exchanged contact details with Grant and caught the tube home.

That night I couldn't sleep.

stuart said…
I remember a similar coming out I had to do with Kate Bush, though I was eighteen at the time... After spending my adolesence listening to noisy German thrash bands like Kreator, Sodom and Exumer and even noiser 'Brit Core' bands like Napalm Death, Unseen Terror and Doom, I would only listen to Kate Bush when everyone was safely out of the house (for reasons very similar to yours!).
Never got the chance to meet Kate Bush as you did Toyah though, never mind actually recording a single with her...
Monday, June 21, 2010 12:22:00 pm