June 26, 2010
Thugg the Caveman and some of the other males from his tribe made their way across the tundra of Ice Age West Midlands.  It had been a hard winter and numbers had decreased significantly. Some had been lost to the cold, some to hunger and still others to the saber-toothed tigers that continued to plague this branch of infant humanity. 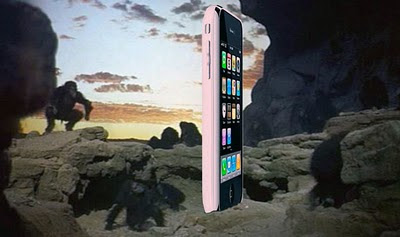 Thugg clipped Foot-Watcher around the ear and by means of a series of complex grunts and gestures indicated to him that whilst staring at his own feet might one day become the de rigueur pose for indie musicians many millennia hence, right here and now it was about as much use as a chocolate teapot.  Foot-Watcher looked perplexed - as well he might seeing as neither chocolate nor teapots would be invented for thousands of years - but straightened up and begun obediently scouring the horizon.

In this neck of the woods there was no friendly neighbourhood alien monolith to give them a helping hand; they'd had to rely on their own wits to get this far and if they were going to make it out of the Ice Age in one piece they'd have to develop further coping strategies.

The problem was you could never be sure where danger was coming from. Or when. It was true that sometimes tigers would run out from behind that outcrop yonder, but the problem was that if you kept your eye on the outcrop the whole time you ran the risk of falling foul of the bear that had recently started using the nearby copse as an outhouse.  Not to mention that huge eagle that had recently started carrying off some of the lighter members of the tribe.

It was all very irritating, but Thugg had come up with a way round this conundrum. He kept looking about. Now the outcrop, then the copse, then the sky.  Then the sky again, followed by the rock and then the copse for a couple of minutes. Then the rock. And so on - random, unpredictable and strangely addictive. There was no way he could predict where the next attack would come from, but he might stand a better chance of catching it out this way - and even if he didn't at least he'd have invented OCD ten thousand years early.

He even took to carrying a small piece of bark around with him upon which he drew three small pictures. A tree. A rock. The sun.  Every time he looked in one of the places, he scratched a mark next to the picture.  Even though he wasn't checking them on a regular, repeatable basis, this tally did at least allow him to make sure he wasn't favouring one or the other.

Foot-Watcher didn't get it at all.  The last time they'd come out this way a tiger had run off with Grugg, so his attention was firmly fixed on the outcrop.

This was his undoing. With a screech of victory the giant eagle pulled up out of a silent power dive and headed towards the distant cliffs, a howling Foot-Watcher dangling from its talons.  Thugg stared up after him in dismay - he'd promised Foot-Watcher's mother he'd keep an eye on him, and instead he'd let him get killed. What was he going to say to her? Now he was bastard of the world, and he was not quite sure what to do next.

But he would think of something.

He hurled his fragment of bark up after the eagle in anger and frustration but it did no good. Foot-Watcher was gone.

Hold on the bark fragment. Zoom in. Track it upwards. And....

...cut to an iPhone slipping in slow motion from the palm of a businessman standing on a balcony in New York City at night. It falls down, down, down...

We're all living with the legacy of Thugg's learning, and things that appear and disappear in the manner of predators or prey capture our attention like nothing else.  Random, intermittent, sudden. We become addicted to games like Tetris or more recently to activities like checking our emails, twitter feeds and status updates.  Whilst these may not be a matter of life and death, they fit very closely into the spaces in our head that evolved to deal with matters of life and death, and we're powerless against their allure. After all, in the past ignoring such compulsions would have got us killed.

We just can't help ourselves. But maybe we should try - after all there's no reason we should remain slaves to our selfish genes all our lives.

We have nothing to lose but our chains.
addiction emotion eye fiction journal psychology Thugg the Caveman